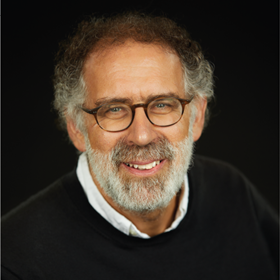 Mitchel Resnick’s portfolio is packed with impressive titles and honors – a bachelor’s in physics from Princeton University, a master’s and Ph.D. in computer science from the Massachusetts Institute of Technology (MIT), where he works today. There’s even a stint as a science-technology journalist at Business Week, too.

But students and educators around the globe likely know him for his position as director of the Lifelong Kindergarten group at the MIT Media Lab. Oh, he has other titles there, too, such as the LEGO Papert Professor of learning research. Yet it was his sense of play that led to developing popular classroom software like LEGO Mindstorms and WeDo robotics kits, and the Computer Clubhouse, an award-winning network of 100 after-school learning centers for youth from under-served communities.

Still doesn’t ring a bell? Then let’s cut to the heart of why students love him: Resnick is the man behind Scratch software that millions of children have used to create interactive stories, games, music and art.

Whether you’re a parent or a teacher, “the core issues for cultivating creativity are the same,” he wrote in his book, Lifelong Kindergarten: Cultivating Creativity through Projects, Passion, Peers, and Play. “The key challenge is not how to ‘teach creativity’ to children, but rather how to create a fertile environment in which their creativity will take root, grow and flourish.”

And it’s not a topic where adults can hang back and hope for the best, as Resnick points out in his TED Talk. In fact, he’s skeptical about thinking of our youth as digital natives. Just as being fluent in a language means you can journal, tell a joke or write a letter to a friend, the same holds true with technology. Today’s students use technology to play games or chat on their phones, but that’s a far cry from creating technology or expressing themselves using technology.

That’s why Resnick has worked to provide all students of all ages and backgrounds with opportunities to learn to code – a skill he says is a fundamental communication tool in the digital age.

A turning point in Resnick’s career came when he heard educational computing pioneer Seymour Papert give a keynote address at the 1982 West Coast Computer Faire. Papert’s presentation sparked a new vision of what roles computers might play in people’s lives. “They weren’t just machines to get a job done – they could … change the way people thought about themselves and thought about the world. That was very exciting to me,” Resnick noted.

Resnick, winner of the 2011 McGraw Prize in Education, the 2013 EdMedia Pioneer Award from the Association for the Advancement of Computing in Education and a 2018 ISTE Making IT Happen Award, shares his thinking on coding, playfulness and digital creation.

What was the first computer you used? Do you remember the first program you wrote that you were really proud of?

I first used a computer in 1972 in a 10th grade class called “Computer Concepts.” We wrote programs on punch cards and ran them on the school district’s minicomputer. I remember writing a poker-playing program where users decided which cards to keep or discard by flipping switches on the front panel of the minicomputer.

Is learning to code as important as learning to play a musical instrument, for example? Where should it fall in the priority list of a school?

In your book Lifelong Kindergarten, you write that kindergarten is the greatest invention in the previous thousand years. You and others have written much about the importance of play in developing creativity, an essential trait for success in the workforce. Yet most schools in the U.S. and around the globe haven’t changed their structure or model much in the past 200 years. What are small steps any educator can take to bring play into their classrooms?

More important than supporting “play,” we need to support “playfulness.” That is, we need to encourage children to take risks, experiment and test the boundaries. And we need to create environments in which children feel comfortable making mistakes – and trying new paths when things don’t go as they expected. That’s what playfulness is all about.

A study by Raj Chetty of Stanford found that children from high-income families are 10 times more likely to become inventors than children from low-income families because, in part, children who grow up in wealthy areas are surrounded by people who work in STEM fields. What are some realistic and affordable ways educators in low-income and rural areas can expose their students to people who work in STEM fields?

In our work in low-income communities, we usually try to identify adult mentors who are engaged in their own creative practices. Often, these people come from art, music and design backgrounds, not necessarily STEM fields. Drawing on their own creative experiences, these mentors are able to help children develop their creative capacities – and begin to appreciate the joys and satisfactions of creativity and invention.

You co-founded the Clubhouse Network 24 years ago to combat inequities in STEM. Can you describe what makes the Clubhouse model distinct from other after-school programs aimed at disadvantaged youth? Would you say it’s been successful?

When Natalie Rusk and I started the first Computer Clubhouse in 1993, we often said that “access is not enough.” We knew that youth needed more than just access to technology.

We provided opportunities for youth to create projects (such as music videos and robotic inventions), based on their interests and as part of a supportive community where they could collaborate with peers and get advice from adult mentors.

Based on these guiding principles, the Clubhouse network has expanded to 100 sites in 20 countries around the world, serving 20,000 youth each year.

You’ve said that the goal of the MIT Media Lab is to help children learn to think creatively, reason systematically, work collaboratively and learn continuously. Why do you think these are the “essential skills for success in the 21st century” and are there others you’d add to this list?

We live in a world that is changing more rapidly than ever before. Today’s children, as they grow up, will face a never-ending stream on unknown, uncertain and unpredictable situations. To thrive in this ever-changing world, they must learn to think and act creatively.

Developing as a creative thinker requires more than a spark of imagination. It also requires the ability to reason systematically, collaborate effectively with others and continue to adapt and learn.

What do you mean when you talk about “hard fun?”

I learned the phrase “hard fun” from my mentor, Seymour Papert. Too often, adults think that children want things to be easy. That’s not the case. We’ve seen over and over that children are willing – eager – to work very hard, over extended periods of time, when they’re working on things that they really care about. That’s hard fun.

You helped develop the block-based programming language Scratch in 2003 and publicly launched it in 2007. Today, there are more than 29 million registered users and it’s been translated into 70 languages. Did you and your colleagues envision it would become this popular with kids? What aspect of Scratch makes it so irresistible?

I think there are three core reasons for Scratch’s success. 1. It’s more accessible. With Scratch’s graphical programming blocks, children can easily snap together programs and then easily revise them, without worrying about the obscure punctuation of traditional text-based languages. 2. It’s more meaningful. Children can create projects based on their interests, mixing together different media (music, photos, graphics, sounds) to create interactive stories, games and animations. 3. It’s more social. The Scratch programming language in integrated with an online community so that children can easily share and collaborate on projects – and get feedback and inspiration from one another.

What are some of your favorite Scratch projects created by kids?

A teen from South Africa created a Scratch project called “Colour Divide” in collaboration with a group of teens from several other countries. The project is an animated story of a dystopian world where children are assigned colors based on their magical powers. The lead creator of the project explained it this way: “Growing up, I’ve definitely seen the scars that apartheid has left on my country and the people. I’m really exploring that through the different characters that are a part of this story.”

You included an online community when you created Scratch, something that was uncommon at the time. What was your thinking behind having that additional level of connection?

Many children say that they come to Scratch to make projects, but stay because of the community. When children share projects in the community, they get feedback, suggestions and encouragement from one another. At the same time, children get inspiration by trying out other people’s projects or collaborating on projects. When everyone shares, everyone benefits.

You collect data on Scratch use. What insights has it given you? How should we be using data to personalize learning and influence instruction?

For his Ph.D. dissertation, Andres MonroyHernandez studied the data on how children create “remixes” by modifying the code and graphics in other people’s projects. He found that more than 25 percent of all Scratch projects are remixes and he documented how remixing helps new ideas and techniques spread through the Scratch community. By analyzing comments on the site, he saw that children often get upset when others remix their projects. To encourage remixing, he added a row on the Scratch home page featuring the “most remixed” projects so that children would feel pride (not frustration) when their projects get remixed.

How can teachers overcome the feeling that they will never be able to keep on top of all the new technology that is emerging?

What is one powerful idea an educator could focus on in their teaching that would make a significant impact on how their students learn?

My friends at the Tinkering Studio at the Exploratorium like to say: “The Big Idea is Their Idea.” Rather than trying to deliver instruction and information to your students, help them to follow their interests, explore their ideas and develop their voices.