Rafranz Davis: Building equity one student at a time 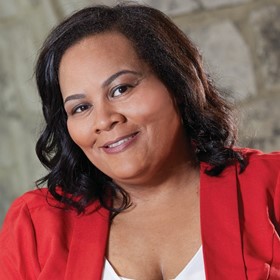 It was like a scene from a movie. When first-year teacher Rafranz Davis took over the eighth grade math classroom at Ennis Junior High School in Ennis, Texas, just weeks before the state exams, students greeted her by flipping their desks around, putting their feet up and turning their backs in protest.

“I walked into this class in small-town Texas where they had gang issues and there were kids who had never had any success at all since they were in school,” she says. “They’d been watching movies all year. When I walked in and actually started teaching lessons, they said, ‘Miss, we ain’t don nothing all year. What makes you think we’re going to do something now?’”

But Davis, winner of the 2017 ISTE Outstanding Leader Award, isn’t the type to give up on a single student. She’s the type who scours the internet for online tools to engage reluctant learners. She’s the type who transitions from teaching middle to high school – just to make sure one student graduates.

And today, as director of digital learning for Lufkin Independent School District in Lufkin, Texas, she’s the type who uses her voice in education to speak up about access equity and how technology can help close the gap for marginalized students.

Teaching in a small town, Davis saw both sides of the technology divide. Her technology-rich preservice training had opened her up to exciting possibilities, from fully interactive lesson plans to sophisticated math visualization software, but lack of access in the classroom posed constant challenges.

“I came to class knowing I needed to share the experiences I’d had with technology. I knew I had to incorporate those same types of interactions in some way,” she says. “But there were so many things our kids didn’t have access to.”

She watched her students struggle without access to basic online information – unable to look up colleges, research careers or even check the latest news headlines. “You would think that would be a normal thing to do by now, but in some places it’s not,” she says.

With ideas too big for one classroom, Davis became a math strategist at Grand Prairie High School in Dallas, where she led the math department in laying the groundwork for its technology plan. Going in, she didn’t know just how big a task that would be.

“When I walked into that school, they had zero technology whatsoever,” she says.“Their version of technology was a projector that wasn’t even connected to computer – just a document camera.

“In 2013? That was sort of the beginning of the end for me. I decided I was going to be part the movement to figure technology out.”

She started networking and presenting at conferences. She got involved in digital access issues, became active in the ISTE Digital Equity Network and started advocating for diversity in edtech. The more involved she became, the more she saw how district politics affect both educators and students of color.

“It’s the micro-aggressions we have to deal with,” she says. “I’ve sat in rooms and heard other school leaders say they didn’t want to send technology to a campus because the kids would pawn it or tear it up. White students got new technology, while minority schools got old technology. That in itself takes a different toll.”

She credits nationwide efforts such as the ConnectEd initiative for changing the conversation around equity. Davis was one of the educators who spoke during the program’s official launch at the White House three years ago, delivering a presentation on future-ready professional learning.

“It wasn’t about politics, it was about learning for kids,” she says. “It made us talk about connecting, period. I can see a tremendous difference. We’re talking about equity now. How do we get devices to kids and connect them at home? We weren’t having those conversations before.”

These days, the four-time White House guest and author of the book The Missing Voices in Edtech: Bringing Diversity into Edtech is focused on making a difference within her community. At Lufkin ISD, she’s helped pioneer a Raspberry Pi summer camp, an annual student robotics hackathon and an innovation night where students and teachers share their best lessons and projects.

“Right now, I’m really focused on local change and providing support within the communities where I have direct impact,” she says. “This country is undergoing some changes. When you think about community organizing, you have to understand what it means to have a voice. Having a voice starts locally. How can I make a difference where I am?”

Nicole Krueger is a freelance writer and former newspaper reporter. She writes about education technology and the transformation of learning.

This is an updated version of a post that was originally published on Oct. 1, 2017.