Unleashing every genius: Creative genius isn't rare but the conditions that nurture it are 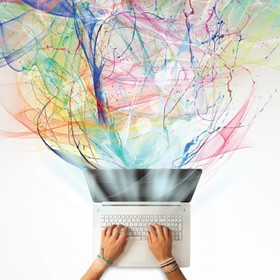 Hannah Edge grew tired of heading to the emergency room every time she had an asthma attack. So at age 13, she designed and 3D printed a prototype for a handheld device that can measure lung capacity in real time.

Concerned about the dangers of low-orbiting space debris, 18-year-old Amber Yang adapted an algorithm to train her own artificial neural network to recognize space objects and predict their future locations.

With the complex problems that threaten the world today, humanity needs all the innovators it can get. Yet we don’t often ask young people to solve real-world problems. When they do, we lavish them with awards and call them extraordinary.

But holding these students up as exceptional perpetuates a dangerous myth that has permeated the fabric of education, allowing untold volumes of human potential to whither on the vine. It’s the myth that says only a select few students are capable of creative genius – and it’s one that a growing number of educators are fighting to counteract.

“The reason we’re not solving the problems we need to solve is because we’re not leveraging the genius in everyone,” says Angela Maiers, founder of the Genius Hour and Choose2Matter movements. “You can’t foster creative genius if you believe genius is an anomaly.”

In fact some say today’s education systems aren’t adequately nurturing students’ innate creativity – and may, in fact, be training it out of them.

“We’re very condescending toward youth,” says Scott McLeod, associate professor of educational leadership at the University of Colorado Denver. “We hold up the ‘mutational’ example and pat them on head, but we don’t let most kids realize they can do that, too.”

As employers increasingly demand graduates who are capable of high-level innovation and problem-solving, educators have responded by researching creativity and pioneering new ways of teaching and learning. Ideas like project-based learning, makerspaces and Genius Hour offer new pathways for fostering creative genius in the classroom.

But these types of practices remain intermittent and isolated in many schools as the growing wave of innovation continually bumps up against the outdated structures and habits of school as we know it.
“We’ve been in the information age, where students have been taught the ‘what’ and the ‘so what,’” says Sam Sakai-Miller, director of technology integration services for San Lorenzo Unified School District in California. “In the innovation age, as we want students to be problem-solvers and individuals who can think critically, we need to add a third question: Now what?”

The context of creativity

Think back to a time in history that was especially creative or revolutionary – like the year 1922, when Einstein won the Nobel Prize and myriad inventions, from the airplane to insulin, permanently changed the
way people live.

“Within the space of a few years, we moved from a worldview where time and space were absolute to a relativistic, fractured, unstable one,” says Punya Mishra, associate dean of scholarship and innovation for Mary Lou Fulton Teacher’s College at Arizona State University. “So, what was special about that time? Clearly, there was nothing special in the DNA of the people living then. We did not have a sudden emergence of super-human intellects.

Though the field of education psychology has long known which types of approaches and pedagogies are more conducive to creative learning, most schools continue to operate in much the same way as they did a century ago, when students were expected to take factory jobs where consistency, standardization, compliance and convergent thinking were the desired attributes.

Now educators understand that future jobs will demand a different (and in many ways opposite) set of skills, such as creativity, problem-solving and critical thinking. Yet researchers report that the typical school still spends as much as 85 percent of its day-to-day work on procedural regurgitation, or problems that have a single answer, McLeod says.

To that end, Carmen Richardson, an instructional technology specialist at Kamehameha Schools in Hawaii, worked with Mishra to develop an instrument for identifying whether a classroom environment is conducive to creativity. Known as the SCALE (Support for Creativity in a Learning Environment), their tool outlines three key areas for nurturing creativity:

•  A physical environment that offers a variety of resources and flexible work areas for students.
•  A learning climate where messiness and noise are tolerated, students participate in active discussions,
the atmosphere is collaborative and friendly, and differences are valued.
•  Engaged students who work at their own pace on open-ended, authentic tasks; seek multiple viewpoints and alternative modes of investigation; take risks and reflect on their learning; and have time to think creatively and develop their ideas.

The key to a truly creative environment is to open the door to as many different types of learning experiences as possible so that many different students can succeed, says Sylvia Libow Martinez, co-author of Invent To Learn: Making, Tinkering and Engineering in the Classroom.

“Innovation and creativity are about what students are able to do, so freeing up conditions that shut down alternative thoughts and actions is a good start,” she says. “Are students able to do things that are unexpected and serendipitous? The environment should be structured for maximum agency for students.”

The concept of student agency can be frightening. In an open-ended, problem-solving environment, teachers can’t always predict what kids will learn or where their creativity will take them – and teacher education programs often don’t adequately prepare them to empower students in this way.

Rather, they tend to emphasize classroom management and control.

“The idea that kids need to be managed is a different mindset than the idea that they need to be unleashed and liberated,” Maiers says. “Conformity and control are antithetical to creativity.”

•  Weaving their own creativity and interests into their teaching.
•  Making cross-disciplinary connections to the content they’re teaching.
•  Grounding school subjects in real-world applications.
•  Taking intellectual risks and trying out new practices.

In other words, to encourage the types of risk-taking and experimentation behaviors that foster creativity, teachers first need to model them for their students.

“Educators need to be able to try new ideas, even radically different ideas, without fear of punishment,” Martinez says. “Our own hesitation to experiment is a serious impediment to innovation. In the design process, the time spent iterating new ideas is crucial, yet we expect systemic educational change to be completely working on day one. Educators need to be free to iterate on the design of the school day and curriculum.”

The ability to iterate is a fundamental part of the creative process, for students as well as for teachers. Whether they’re building something in a makerspace or creating something in a digital environment, kids need to practice actively failing, figuring out where they went wrong and trying again. On a fundamental level, then, fostering creative genius can be as simple as merely asking students to create.

With the glut of digital technologies available, putting creative tools into students’ hands is easier than ever. But a fifth and equally important habit for teachers is to ensure students are using these tools for active creation rather than passive content consumption – a common pitfall in schools.

“New technologies are always co-opted to do the same old thing in a slightly fancier version of same old way,” Martinez says. “Film and video were used to recreate lectures, computers used to deliver lectures and tests, 3D printers pre-programmed to print out ‘educational objects.’”

A frequently touted internet rule states that only 1 percent of people use the web to create and contribute, while the other 99 percent are passively consumers. To counteract the myth that only a small percentage of the population has ideas worth sharing, teachers need to encourage students to create and share their work in digital spaces.

Putting the “A” in STEAM

Digital creating, which encompasses everything from coding to computer-assisted design to video production, can be a powerful tool for engaging students in any subject. When students learn for the sake of creating, rather than for the sake of passing a test, they can achieve a deeper understanding of the content.

This is especially true for STEM subjects, which have traditionally been kept separate from creative pursuits such as art and music.

In fact, as educators struggle to overcome the massive shortage of students entering science, technology, engineering and math fields, creativity could be the key to getting more students interested in STEM – particularly those who are underrepresented in computer science and other STEM fields.

“I think if you want to reclaim a kid, you start by connecting with the skills and strengths they do have,” McLeod says. “Maybe you don’t know how to code, but I see you’re a good problem-solver in other parts of your life. Then you build bridges between the two.”

For students who don’t see themselves as good at math or interested in science, incorporating creativity, design and the arts can provide more entry points and avenues for connection. But it’s not as simple as merely dragging and dropping the arts into STEAM, Henriksen warns. Rather, the value lies in making the sorts of  “creative, interdisciplinary, research-based, artful and real-world connections” that are at the core of STEAM.

She cites the example of a Spanish teacher who used design thinking to create an in-depth STEAM project on the water crises that have become a growing concern in some Spanish-speaking countries. Students conducted their own research on the scientific and social dimensions of water usage, learned about the cycle of water and created artistic presentations to communicate their work using their newly gained Spanish vocabulary terms.

These sorts of cross-disciplinary connections lie at the heart of creative thinking.

“To get something novel and effective, you often need to blend ideas or start from an existing piece of knowledge that can then morph or transform when it cross-pollinates with other knowledge, ideas or experiences,” Mishra says. “Creativity is often often a combinatorial thing. So in that sense, the integration of the arts and sciences, or any sort of meaningful connection making between disciplines or opportunity to combine ideas, can be helpful to creative thinking practice.”

As a former STEM curriculum coordinator, Sakai-Miller has observed an interesting synergy between creativity and the more analytical skills that underpin STEM subjects.

“When we added the arts, we started to see a better flow of ideas,” she says. At the same time, “the underpinning skills are very important. I notice the more proficient students become, the more creative they become.”

To McLeod, the “A” in STEAM represents the human-centered function that is crucial in developing students’ creative genius. Throughout history, the arts have provided a refuge for students, “allowing them to tap into a different part of their brain and experience than traditional schoolwork does,” he says.

“We have a lot to learn about how to really foster the development of the whole child and the whole adult – not just one that can spit back a few analytical tests.”

Long before the pandemic disrupted learning for 1.7 billion students and forever embedded technology into schooling around the globe, it was already clear that education systems were due for an overhaul.

After all, just as their predecessors had been doing for two centuries, many…

Oct/27/2022
Student Agency, Personalized Learning, Creativity
5 Reasons Why It Is More Important Than Ever to Teach Creativity

On the laundry list of skills and content areas teachers have to cover, creativity doesn’t traditionally get top billing. It’s usually lumped together with other soft skills like communication and collaboration: Great to have, though not as important as reading or long division.