Polarized? Not this student-created election! 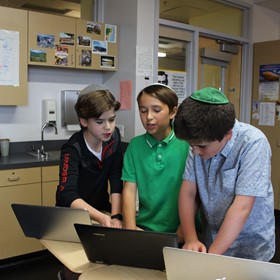 Our job as educators is not only to teach our students academic skills, but to train them in life skills to use kind words, unify and not divide, and promote civility, digital citizenship and responsibility. Regardless of political beliefs, it was challenging to pull this off during the U.S. election last year.

It seemed the election cycle was unraveling our work, thread by thread. Various hostilities, from name calling to disrespectful body posturing, were being played out on television. Social media elevated rants to new levels of " "flaming" " rants and allowed these examples of bad behavior to be replayed over and over.

I found myself girding up during my drive to work, rehearsing how I would respond if our students asked about the latest inappropriate sound bite.

But then something unexpected happened. Two weeks after the election, one of our students bounced into my office excited to show me an election video he made. I braced myself. But this video wasn't a parody or a satire. It depicted a mascot election that he and two of his friends conjured up.

The students decided to create an election for their sixth-grade mascot. Three stuffed toy animals — Gary Alligator, Joseph Giraffe and Roger Bear — were the candidates, representing the advisories or homerooms. One of these candidates would become the advisory president and would oversee all of the advisories in sixth grade.

What I saw made tears welled up in my eyes! Three sixth grade students — Trevor, Adam and Joey — decided to drive their own learning by creating a website using Wix, recording videos of an animal debate, using Google Forms for voting and analyzing Google Sheets for the results! How excited I was to see them connect what they learned in their social studies and study skills classes to current events. It was a true 'aha' moment!

Later that day, I ask them why they created this project. Surely it must have been tied to a project-based learning assignment. My assumptions resulted in an emphatic " "No!" " Here in their words is their account of how this spark of collaboration and creativity took place:

In Ms. Level's Social Studies class, we were learning about debates and presidential elections. We formed a team together and met on a weekend. Immediately we started to set up for the making of the debate. We put up a background with a sheet and took 2 chairs, put them next to each other and that was the stage. While we were setting up the room, Joey made and designed the website. It looks fantastic! Trevor took Legos and made a podium for each of the animal candidates. Then we got some different angles of the stage and finally got to filming. Trevor took the photos while I was putting some of the debates and the commercials together. During the debate we used a voice changer. Then we went around advertising to people about all of the debates and we made different advertisements. Now we have people who watched our debate, visited our website and are now waiting to vote. We are being asked questions about what will happen and how things will turn out.
Adam made most of the ballot on Google Forms, but Joey added to it. On Election Day, Adam used Google Sheets that you showed us in Study Skills to create a chart showing the polls. The winner of the election turned out to be Joseph Giraffe.

The self-directed election project played out over several weeks. Here are some of the artifacts they created:

Debates: The students presented topics that had been in the news or part of their classroom discussions. In the first debate, they wanted to keep the topics broad and focused on issues such as water conservation (a big topic in California) and migrant workers (to bring awareness to deportation and immigration). During the second debate, there were questions about habitat lifestyles in zoos, better education in public schools, solar energy, electric cars and clean energy.

Website: Joey created the website reflecting what he thought students and teachers might want to know about the mascot election. He included a " "Meet the Candidates" " page and a link to view the polls as the results were tabulated. The only difficulty he experienced was preventing " "voter fraud." " He anticipated that people using different email addresses could vote multiple times, and that would be a problem. He ended up using a manual verification process to ensure the integrity of the system.

Commercials: The students made commercials that mimicked car and electronic ads. They chose these types of advertisements because they are popular with students.

Print ads: Election ads with the website URL were displayed on the school's monitor and seen by both lower and middle school students. Lower school students became very curious about the election and began to ask if they could vote too.

Polls: The students created a Google Form and distributed the link to potential voters. They analyzed results in the responses sheet, made corrections and created graphs from the data.

Ballot: The ballot was electronically distributed through a link on their teachers' websites and on the display monitor.

Results: In the beginning the students thought that Joseph Giraffe would win but later Gary Alligator became the favorite because of his appearance and potential strength quotient. In the end Joseph won. The results were announced during advisory period, on the display monitor and on the website.

This project was a lot of fun for the students who took the initiative to create it and for others who followed the campaign and voted. But it was also an excellent example of a student project that fostered deep learning and addressed multiple ISTE Standards, including these:

Empowered Learner
1c: Students use technology to seek feedback that informs and improves their practice and demonstrates their learning in a variety of ways.

Computational Thinker
5b: Students collect data or identify relevant data sets, use digital tools to analyze them, and represent data in various ways to facilitate problem-solving and decision-making.

Creative Communicator
6d: Students publish or present content that customizes the message and medium for their intended audiences.

Learning how to be imaginative, creative and collaborative are important skills for students. It is the very catalyst that can foster change. This project not only shows how our sixth graders process political divisiveness, but it also indicates that they understand that expressing different points of view does not have to be quarrelsome. In the end, it turned out the candidate with the most " "bite" " did not win.

This is the heartbeat of why I do what I do to empower students to drive their own learning using technology. And that in itself is unrehearsed and authentic!

ISTE member Dyvar Anderson is technology director at Sinai Akiba Academy in Los Angeles. She holds a bachelor's in business management from Southern University, Baton Rouge, Louisiana and a master's in instructional design and technology from the University of Houston, Clear Lake. She has worked in IT corporate healthcare and hospitality, owned an internet/e-commerce solution center and has held various edtech roles in independent schools. She is currently pursuing her doctorate in e-learning.