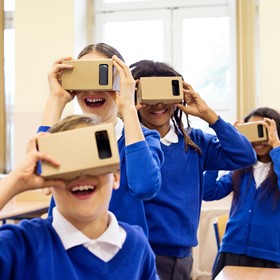 The role of virtual reality (VR) in the classroom is still being parsed, but early adopter Amanda Fox is convinced the technology is more than a fad. In fact, she sees it as the ultimate way to personalize learning and encourage students – and teachers – to use technology to create, rather than consume.

While educators might be familiar with using VR for gaming or virtual field trips, Fox says the technology can deepen learning – whether with affordable headsets like Google Cardboard, sophisticated devices like Oculus Rift or simply though 360-degree video and photos. And as creative director of STEAMPunksEdu in Kentucky, she’s created the lessons to prove it.

In one of her ISTE Standards-aligned lessons, students build a crime scene, complete with a location, CSI lab, suspects and witnesses. Other students then visit the scene and try to figure out who committed the crime.

And in a lesson on how cities form and evolve, students create 3D cities depicting the elements of society, including government, infrastructure, education institutions and luxury items like malls.

Perhaps the best news of all, Fox says VR creation is easy for both students and teachers to learn. She picked it up in a single afternoon after watching a few videos and tutorials.

Here are some of the reasons why Fox is excited about creating with VR:

It can personalize learning.

Generic and one-off experiences available online might be fun, but they don’t always align with specific curriculum or standards. When students and teachers create VR experiences, the content can be customized to meet curriculum targets and the ISTE Standards.

It allows for creation.

Creating and collaborating are the key words when it comes to deepening learning and engagement and implementing the ISTE Standards for Students, including Creative Communicator, Innovative Designer and Computational Thinker. VR creation is one more exciting way students can move from consumers to creators of content.

It can localize and globalize learning.

Sure, you can go on a virtual field trip using what Fox calls “pre-hatched” VR, but with VR creation platforms, students can take their own 360-degree photos and create scenes featuring and exploring local environments.

And if students in different parts of the world are studying the same topic, they can create VR environments from their region and share them globally as part of a project-based learning project.

Take a lesson on marine biology, for instance. “If students in Georgia are studying the same thing as students in Australia, we can use VR environments to compare similarities in our coastlines and get a better understanding of how connected we are,” Fox explains.

VR is where the world is going  – many movie trailers are already being released in this format. By teaching students how to create using the technology, it demystifies the magic behind it, Fox says. “They take on more of a critical eye and a deconstructed view of the technology. It’s like understanding a machine from the inside.”

And when students can do that, they’re better prepared for the jobs of the future, she says.

CoSpaces Edu lets users create, code and explore virtual worlds. Students can create spaces by dragging and dropping items from a library of 3D assets. Environments can be brought to life with coding using Blockly, a visual tool that introduces the logic of coding, JavaScript or TypeScript. A new physics mode allows users to adjust things like weight, friction and “bounciness” to create roller coasters or a domino show. The platform works on all devices or through a companion app for tablets and smartphones.

“3D design, VR and coding are all combined in a multimedia platform,” Fox explains. “Young learners can code using Blockly and older students can use actual script code.”

Roundme is a VR creation platform where users can create interactive tours with panoramic photos. Roundme’s hotspot feature lets users add links, other photos or videos to specific places in their panorama. The app allows students to upload their own images or pull from sites like 360Cities’ stock service.

ThingLink’s 360/VR Editor is a multimedia editor that allows users to annotate 360-degree images and videos and view them in virtual reality. Users can annotate the panoramic images with text, image, audio and web embeds. The audio and video annotations play as the viewer aligns a pointer with an icon that is displayed in the picture. The tool also allows users to connect multiple videos or images together to create more immersive experiences.