Why Students Should Create With AI Tools 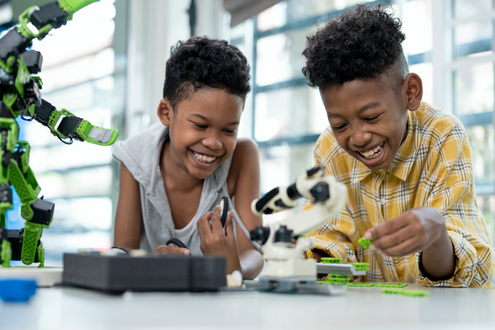 That student with the heart of the world was born,
My data burns the same stars in a window.

No human would ever mistake these lines for award-winning verse. If they’re a bit fanciful and lack coherence, that’s because they were composed by a computer algorithm trained on more than 20 million words of 19th century poetry.

Feed a word to the Poem Portraits website, and Google’s artificial intelligence will spit out a short poem in response. The seed word in this case was “student.” The resulting word salad makes it clear that as powerful as AI is, it still can’t create like a human.

What it can do, however, is expand the human capacity to create.

Ever since Pixar Animation Studios used artificial intelligence to animate lifelike hair in the film Brave, designers, composers and creators of all sorts have been increasingly leveraging machine learning and other AI technologies to take their creations in new directions.

Video game developers can build games that automatically generate endless new levels for users to play. Artists can create striking paintings without ever picking up a brush. Filmmakers can compose royalty-free music for their videos without a lick of musical training.

Just as AI promises to change the relationship between humans and their work, it’s also on the verge of transforming how we express ourselves. For creative professionals across a variety of industries, creating in collaboration with AI will become the standard of the future.

Not only will today’s students need to become adept at using AI tools, but to become truly empowered creators they’ll need a deeper understanding of how AI works — and their changing relationship to it as designers and artists.

Middle school students at Edward W. Bok Academy in Lake Wales, Florida, are experimenting with a variety of AI-powered creative tools as a way to learn about how artificial intelligence works while also exploring their interest in the arts. They’re conducting virtual symphonies, composing music and drawing pictures to see if AI can recognize the images.

As his students discover what AI can help them do — like create entire musical compositions incorporating multiple instruments — they grow increasingly curious about what else the technology might be capable of. This curiosity will be a key job skill in a future with AI, where everyone won’t necessarily need to become a coder but will need to become adept at imagining new ways AI can optimize their work.

Lockett sees the creative process as integral to learning about AI.

“When you’re approaching AI with students, you want to first show how it’s used in everyday society, how it’s used in their smartphones, how it’s used in different programming. Then give them tangible ideas they can create,” he says. “We started with art and music because our students love to listen to music, they love the drawing aspect, the STEAM part.”

Tools for creating with AI

Here are some tools educators can use to helps students explore the creative potential of AI:

Ground AI concepts in tangible experiments that let students interact with the technology and test its creative limits. Users can create beats from everyday sounds, draw in collaboration with AI and more.

Pixar in a Box

A partnership between Pixar and Khan Academy, this online course gives students a behind-the-scenes look at how filmmakers use STEM subjects in animation. While it doesn’t focus exclusively on AI, it does highlight some of the ways artificial intelligence supports animation. The interactive lessons allow students to try out various concepts, such as creating their own virtual models of different phenomena.

This research project allows students to explore the role machine learning plays in the creative process while getting their feet wet with TensorFlow, an open source platform for developing and training machine learning models.

As students experiment with AI creative tools, the following discussion questions can prompt them to think more deeply about artificial intelligence:

Experts predict AI will ultimately impact nearly every job in every industry — and creative professions are no exception. Creating with AI tools helps students prepare for this future while opening their minds to the creative potential of artificial intelligence.