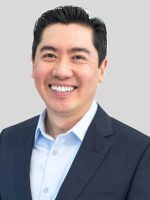 Mr. Nguyen, who immigrated from Vietnam to the United States at eight years old as a refugee, credits public education and devoted educators for transforming his and his family’s lives. His drive is to create opportunities for all students to dream big and create their own paths to succeed and thrive.

He is responsible for implementing AVID’s strategy, which includes furthering its mission of closing the opportunity gap and preparing all students for college, and career, accelerating the scalability of AVID as a schoolwide and districtwide system, developing student-centric technologies to enhance and sustain the student experience in AVID, and determining how AVID can best serve urban districts.

At AVID, Mr. Nguyen has been instrumental in launching more resources for educators over the past four years than at any time in AVID's history, creating AVID's public service for educators, and navigating the organization through the pandemic. During Mr. Nguyen’s tenure, more than 3,200 schools have partnered with AVID Center, increasing the number of students served by more than 1.5 million.

Mr. Nguyen was named a Computerworld Honors Program Laureate in 2008, was selected as one of the National School Boards Association’s “20 to Watch” for 2008 and was named as one of the 100 most important people in education technology as part of Tech & Learning’s 30th anniversary celebration in 2010. He has also worked on two projects permanently archived in the research collection of the Smithsonian Institute’s National Museum of American History. In 2013, Mr. Nguyen’s work received recognition from The Center for Digital Education, The National School Public Relations Association, The One-to-One Institute, and Project RED for web technologies, branding and communication to the community, student technology, and a one-to-one project. His team also received the national CoSN Team Award and was recognized by the National School Board Association in 2014. In 2015, he was honored by the Northwest Council for Computer Education (NCCE) as the Outstanding Technology Leader of the Year.

In 2021, Mr. Nguyen became the 58th person in San Diego State University’s history to be awarded an honorary doctorate for his work in education. The first person to receive such an honor by SDSU was John F. Kennedy.

ISTE Board of Directors