Joke's on him: How technology gave Jack Gallagher his son back 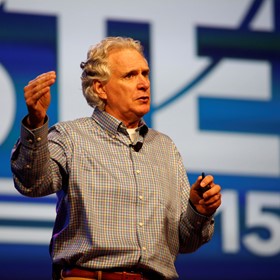 It’s easy for Jack Gallagher to joke about technology. The  opening line in his ISTE 2015 keynote address was: “I’m the least technically savvy person in this room. I’m hoping I have enough skill to run the clicker for my slides." Later, he poked fun of his need for computers, declaring his desktop screen “a giant typewriter.”

After all, Gallagher, a former teacher, does comedy for a living. His résumé is studded with three Emmys for his work on PBS as well as appearances on Johnny Carson’s “The Tonight Show” and “Late Night with Conan O’Brien.” He also has big-screen credits working beside Bobcat Goldthwaite and appearing in “Heartbreak Ridge” with Clint Eastwood.

His life and career were the definition of cool, a trait that Gallagher admits “most of us do not have the capacity to create (on our own). We don’t have enough self-confidence or self-esteem.”

Technology’s role in student-centered learning would be the savior, but he hadn’t yet realized that punch line.

Watch the video clip below from Gallagher's ISTE 2015 keynote, where he tells the story of the moment he realized that he had to accept help, when Liam was carried out to sea on a surfboard.

Determined to avoid society’s labels and preconceived ideas of how autistic children behave — “he’s not Rain Man,” Gallagher insists — the father dusted off his classroom teaching experience and set about to help his son make it in a mainstream classroom.

“When I look back, I see I was trying to fix him. That’s not what I thought at the time, believe me. But that’s exactly what I was doing. My thought was that if we worked hard and we worked together, we could get to where we needed to be. I bought into the labels,” Gallagher told a packed audience.

Recognizing that his son is a visual learner, he created charts, flashcards, graphs and games. At one point he rewrote Liam’s entire math book to make it clearer. It was in vain. Homework involved yelling, crying and misunderstandings that ate into the father-son relationship.

Letting go of the reins

It was, in fact, the quintessential struggle between traditional teaching styles and emerging theories — and Gallagher’s tried-and-true methods were failing. So he asked the educational community for help and began to back off to let Liam set the pace.

Over the next few years, his brilliant son found a groove in writing a script around “The Simpsons” animated comedy series. He used gaming platforms to make up stories of characters in a fictional town called Katring City, Florida, and with Gallagher’s assistance, built a replica of this city using items around the house as part of his art class. The parents enrolled him in a high school that is part of the New Technology Network, where anime software opened still more doors that allowed Liam to demonstrate his characters’ personalities more fully. Today, at age 19, the young man is looking forward to studying animation in college.

“I realize now I was trying to squelch that imagination,” Gallagher confessed. “Liam is a computer guy. I thought it was impeding our progress. By the time he got to high school, we knew technology had to be part of Liam’s life no matter how much I couldn’t connect with him.

Liam thrived in this environment, where he gained a sense of confidence, asked questions, helped other kids with projects and made comments in class. Most important, he was no longer seen as a special needs kid.