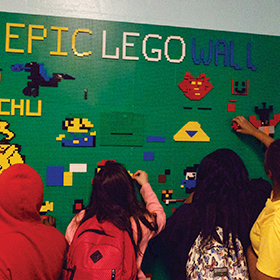 What if making wasn’t something students did only at certain times of the day?

What if, instead, it was built into the fabric of their lives — or even the very walls of their school?

Employees at innovative companies like Google use tinkering to recharge their creativity throughout the workday. Just a few quick moments of making at the office LEGO wall, even in passing, is often enough to hit the reset button.

When librarian Diana Rendina decided to create a makerspace at Stewart Middle Magnet School in Tampa, Florida, her students were emphatic about having a dedicated space that would always be available to them. So she adapted Google’s idea, designing an epic LEGO wall where students can stop by and build any time during the school day.

“I decided if it’s good enough for Google, it’s good enough for my students,” says Rendina, author of the upcoming ISTE book Reimagining Library Spaces: Transform Your Space on Any Budget. “I wanted it to be the focal point of the makerspace, something that sets the tone that this is a place for creativity.”

The wall has been a smashing success. Kids walk into the library and beeline for it. Even if they don’t have much time, they can easily pop in, create and leave with minimal muss and fuss.

But the story doesn’t end there. Rendina, an ardent blogger, posted a tutorial to help other educators adapt the idea for their makerspaces. Since then, dozens of educators have used her tutorial to build their own LEGO walls.

It spans all ages. Schools of all grade levels, from elementary to high school, have successfully incorporated the idea. Tinkering has no age limit – as Google’s employees can attest.

It can go anywhere. Since LEGO walls take up minimal real estate, any educator can find the space for one. Some teachers have put up mini-walls outside their classroom doors, while other schools have converted entire hallways.

It's definitely adaptable. Inspired by Rendina’s tutorial, educators have added LEGO walls onto the ends of their library bookshelves or even the front of the checkout desk. One school made a portable LEGO wall out of a broken Smartboard.

“It’s really neat to see how people have made it their own,” Rendina says.
Students explore near space with balloons

In the past few years, elementary students from Cherry Creek School District in Colorado have launched all sorts of things into space.

They’ve sent up marshmallows to see if they would explode (they didn’t) and sunflower seeds to see if the radiation would make them grow into seven-foot-tall Hulk plants (it didn’t). They’ve even collected bacteria from above the jet stream to see if it’s the same as the bacteria on their playground (it wasn’t).
Their hypotheses don’t always pan out, but students who participate in the district’s unique STEM-focused after-school program are learning fathoms while exploring near space with balloons.

“Our students get to be part of something that seems almost impossible,” says Keli Kinsella, a STEM and innovation coach for the district. “They’re participating in a project that is bigger than themselves. They’re seeing themselves through the eyes of engineers and scientists, and they’re becoming those individuals. It taps into their curiosity and wonder.”

Elementary STEM and Innovation Coordinator Jon Pierce got the idea for launching balloons into near space after watching Felix Baumgartner complete a record-breaking jump from a helium-filled balloon more than 128,000 feet above the ground in 2012.

“I wondered what it would be like for students to send something to that altitude,” he says. “It became a pretty common experiment among hobbyists and MIT grads, but it wasn’t common among schools.”

He pulled together a core team to plan and pilot the project. To show proof of concept, he needed to recruit elementary schools from all areas of the district. After a year of planning and working with students to prepare for the pilot launch, more than 600 students and parents gathered on the football field to send seven balloons the size of smart cars into near space, where they would reach an altitude of about 118,000 feet.

“It was the first time ever that seven balloons were launched simultaneously,” he says. “If you launch one balloon, you have to fill out forms and get cleared through the FAA. If you send up seven, it’s like an obstacle course for 747s. We had to speak with air traffic control to clear the air space.”

Based on participation alone, the program has been a smashing success. By the second year, the district had more than doubled its launches. In year three, they sent up nearly two dozen balloons. This year, more than 30 schools are participating in the program for a total of 32 launches, says STEM and Innovation Coach Adrian Neibauer.

It's designed as an after-school program. To get schools on board, Pierce knew the program would need to happen outside of school hours. Teachers helped sketch out a series of lab activities to introduce key science and engineering concepts while building up to the launch, but they kept the curriculum flexible. By the third year, half the schools had moved the program into the classroom, and some made it the capstone project to their weather unit.

The whole community gets involved. Pierce’s team provides models, coaching and logistical support for schools that participate in the program, but they rely on the enthusiasm of teachers, parents and community members to keep it going. That’s what makes the program both sustainable and scalable.

Students craft their own experiments. While the wow factor of space gets students excited about STEM, the program is also firmly grounded in real-world science. After exploring concepts like buoyancy and drag within micro-experiments, students then design their own experiments, make predictions based on their observations, and build prototypes for their launch payload.

“The data we’re collecting is so rich and relevant, we’re getting asked by high schools for our data,” Neibauer says. “We’re launching so many balloons over the course of a year that we now have good data set that real scientists can use.”

Nicole Krueger is a freelance writer and former newspaper reporter. she writes about education technology and the transformation of learning.

When someone talks about advocacy, what do you think about? You may imagine ISTE members walking the halls of Congress or writing letters to their state legislators, sharing their values. These activities are important as they connect us to those who make policy and approve funding. We must…

California schools are funded at a per-pupil level that currently places them at somewhere between 46th and 49th out of 50 states. This lack of funding is compounded by the fact that the cost of living in most of California is far above the national average.

In Wisconsin, the goal of the Digital Learning and Technology team is to help our state’s educators leverage digital tools to increase student engagement and outcomes, rather than to develop educators’ capacities to use any one specific device or piece of hardware.