Leon Tynes: Working To Tip the Scale on Diversity 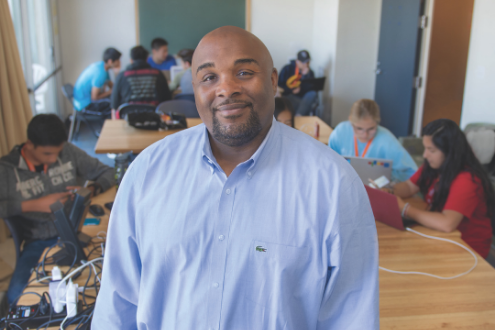 Leon Tynes couldn’t believe what his students were telling him.

Black men, they said, comprise fewer than 2 percent of U.S. educators. And that number is shrinking at an alarming rate.

A black male educator himself, he’s no stranger to the diversity problems that still plague many industries – including his own. But even he was shocked that representation among teachers was so low.

“I don’t know what’s happening in education,” says the technology department head at Engineering and Science University Magnet School in New Haven, Connecticut. “I’ve been holed up in the four corners of my classroom and had no idea what was going on with anything regarding teacher diversity until my students kicked open my door to do a documentary about it.”

His high school students initially planned to make a 10-minute film, but quickly discovered the topic was more complex than they had realized. To fully explore the factors behind the statistic, they needed to dive deeper into history.

The project led them on a journey of discovery. They interviewed two dozen experts. They analyzed the U.S. Constitution. They learned about Brown v. Board of Education, the watershed 1954 Supreme Court case that desegregated schools and contributed to a decades-long decline in black male educators.

In the end, they emerged with a 45-minute documentary, “Extinction: The Disappearance of Black Male Educators,” and a far deeper understanding of history than they’d ever gained from a textbook.

He left the legal field to be a teacher

For Tynes, ISTE’s 2018 Outstanding Teacher (who almost didn’t become a teacher himself), the student-led project hit close to home. A gifted but indifferent student, he skated through school with middling grades and narrowly avoided slipping through the through the cracks. Instead, he went on to earn two law degrees and a master’s degree in business administration.

Although his mother taught for more than 40 years, he didn’t consider teaching until, working as a legal research clerk for the state of Connecticut, he glimpsed a side of affirmative action that left a bad taste in his mouth. The state had a diversity ratio to fulfill, and they weren’t subtle about it.

“I hated it,” he says. “I hated the way they used African-Americans as a diversity platform. It was really bad. I was in the ‘quota’ program, and it wasn’t something I wanted to do for the rest of my life.”

After working for years in law and business and seeing few minorities in those spaces, he decided to focus his career on spring-boarding urban students into successful careers.

Growing up in Richmond, California, he knew it could be done. Many of his friends from urban districts had become doctors and lawyers. Some worked in tech during Silicon Valley’s formative years, and they infected him with the technology bug. Every Friday, he would visit a friend’s office and learn about JavaScript, HTML, CSS and XML.

Those weekly tutorials laid the groundwork for his position at Engineering and Science University Magnet School, which had no technology department when he joined the team eight years ago. He built his department from scratch, writing the curriculum as he went.

He pushes his students to succeed

Today, teens in the internationally acclaimed program regularly win accolades at film festivals, innovation challenges and other tech-related competitions. One group won $20,000 and a trip to Los Angeles during the Paradigm Challenge a few years ago.

If Tynes drives them hard, it’s because he knows what they’re capable of – and he refuses to let anyone slide by like he did.

When his students say they plan on getting a job instead of going to college, he tells them it’s not happening. When parents say they want their child to become a doctor or a lawyer, he asks if they know how much 3D modelers make. And when a group of young filmmakers asks if they can make a documentary about the dearth of black male educators, he tells them they’re going to need to interview some experts.

“I want students to see that yes, if you work hard, these are things you can do – regardless of what demographic you come from,” he says. “They can all achieve, really. It just takes focus and belief.

“If they believe they can do it, we can make it happen.”

Nicole Krueger is a freelance writer and journalist with a passion for finding out what makes learners tick. This is an updated version of an article that first published on Oct. 21, 2018.

Fostering collaboration in the classroom is vital in preparing our students for life. Working in groups can be challenging, which is why implementing an agility framework can become a powerful tool. Developing an agile mindset will empower students to take ownership of their learning while…

In 1872, Yellowstone became the world’s first national park, and early visitors arrived full of questions about the landscape that surrounded them.

The first “guides” were actually U.S. Army soldiers stationed there to protect the park. They took it upon themselves to informally…

Students at Elizabethton High School in Tennessee might have trouble choosing their most memorable learning experience. Was it winning a national podcasting challenge? Collaborating with an FBI…