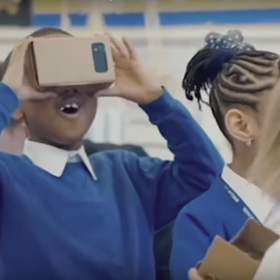 We know that students from disadvantaged families face plenty of barriers to getting a college degree. They lack the money for tuition, books, and room and board. They face life stressors that often take priority over academic goals. They often don’t have the parental support and resources that kids from wealthier families enjoy, like tutoring, standardized test practice and help with homework. They may not have access to the same technology that advantaged students have, including a home internet connection.

There is another barrier, however, that most people don’t think of: Students can’t pursue a dream career if they don’t even know that career exists or understand what it entails.

“None of these students had a clue what they could do if they didn’t have exposure,” said award-winning journalist Soledad O’Brien during her ISTE 2015 keynote speech. Although she was talking about the scholars who benefit from the services her Starfish Foundation, which provides financial assistance, mentoring and wraparound support to help get disadvantaged girls through college, the observation applies to hundreds of thousands of students in the United States.

“I found that my scholars were actually making very safe and uninspired choices out of fear and ignorance. They just did not know what was out there,” O’Brien explained. “Their dreams were often very tiny and built on the one or two professional people that they knew — a social worker because they had a social worker in their lives, a nurse maybe because they had seen a professional nurse they had come in contact with.”

O’Brien found that just telling her Starfish scholars about careers was not enough. They had to see it for themselves, much as her own daughters had when they accompanied her to her office or watched their aunts navigate careers as lawyers and doctors.

Giving hundreds or thousands of students firsthand experience with a wide variety of jobs, however, would not be an easy task. They needed to find a way to scale exposure so that they could reach a great many kids without losing the impact of an immersive experience.

Enter Google Expeditions, an innovative new tool that teachers have been using in classrooms to take their students on virtual field trips. O’Brien saw the impact this technology (and others like it) had on students, and she had an idea: What if she could use Google Expeditions to give her scholars direct exposure to careers they had never even dreamed of?

They began by producing a series of mini-documentaries looking into the lives of professional women. “We started with a CPA, a young black woman; interviewed an athletic trainer, Latina; rolled on investment bankers and then women who managed logistics; interviewed a woman about what it takes to run a bookstore, a woman who ran a bakery,” she said. “‘How do you become an astronaut?’ we asked. ‘What exactly does a consultant do? What do they study? How do they get the job? How much money do they make? What would they do differently if they were given the chance?’”

Watch the clip of O’Brien’s talk below to see Google Expeditions in action and hear how the technology can show disadvantaged students new possibilities for their lives.

Experience your own firsthand exposure to inspiring insights from experts in ed tech and beyond. Register now for ISTE 2016 in Denver!