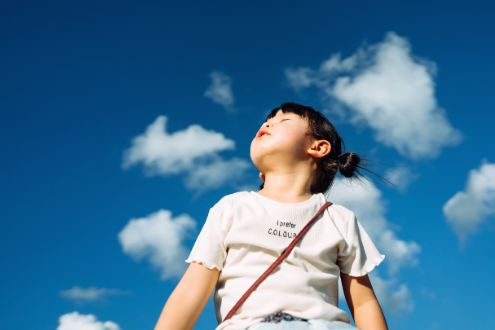 Kids can spend hours watching the clouds sail by, hunting for pictures in their turrets, wisps and streaks. They instinctively turn to the cloudscape to fuel their imaginations.

What they may not realize, however, is that they’re also doing science.

Simple cloud observations can play an important role in understanding how our global environment works, and scientists are hungry for more. Science teachers can put their students’ proclivity for cloud gazing to instructional use by sending students out into the field to collect observational data.

“If we want to understand how the Earth works as a system, we need to look at every single piece—the water, the air, the plants—and put them all together to get a picture of the whole,” says Holli Riebeek, coordinator of NASA’s GLOBE Observer program, a citizen science project that asks participants to help supplement satellite data with on-the-ground observations. “Students can go outside and take environmental observations that help us better understand what our satellites are telling us about the Earth. When we put it all together, we get a more robust understanding of the Earth and how it’s working.”

Kids can do what satellites can’t

Students across the globe have been monitoring the environment for NASA for more than two decades, contributing more than 150 million measurements and expanding the program’s reach to more than 119 countries. The proliferation of smartphones has made participating even easier via the program’s smartphone app, which focuses heavily on cloud observations.

“Clouds play an important role in transferring energy around the planet,” Riebeek says. “We want to better understand the overall role of clouds and how they’re changing as the planet warms. But they change so frequently it’s hard to get good data.”

Together, ground observations and satellite data form a more complete picture than either can on its own, she adds. For example, when there’s a bank of high clouds, weather satellites often fail to pick up on the lower-lying clouds beneath it.

“Citizen scientists tend to see certain kinds of clouds that satellites miss, including the high, thin clouds and the little puffy cumulous clouds. When we put the two together, we get full picture. The more data we have over a longer period of time, the more conclusions we’re able to draw.”

When it comes to making sense of an entire environmental system, clouds are just the tip of the iceberg. Those who want to dig deeper can collect all sorts of different measurements.

GLOBE Observer offers two basic levels of participation. The simplest way to get started is to download the free app, which is available to everyone, and start collecting simple cloud observations. Classrooms can also mine the program’s data for their own inquiry-based science projects using an interactive online map.

For a more robust experience, teachers can attend a workshop or take an online training course and participate in the full program, which includes additional support from NASA, such as student accounts; the ability to collaborate with other GLOBE schools around the world; and the opportunity to monitor other environmental factors, such as water quality, air quality, rainfall and soil moisture.

“Because we’re looking at Earth as a system, GLOBE has over 50 environmental factors students can go out and measure,” Riebeek says.

Students who participate in the full program become more than just citizen scientists. They also get to take part in a larger research community and meet the ISTE Standards for Students by becoming global collaborators.

From regional science fairs to annual meetings to online collaboration, GLOBE Observer invites students to work with classrooms in other parts of the world and see what collaboration looks like in a scientific context.

“I don’t know any scientists who work alone,” Riebeek says. “It’s all about collaboration. That’s a really essential skill if you’re going to work in a STEM environment.”

Nicole Krueger is a freelance writer and journalist with a passion for finding out what makes learners tick. This is an updated version of a post that originally published on April 5, 2018.

5 Ways To Get Creative on International Dot Day

One of our favorite celebrations at school every year is International Dot Day!

This amazing global celebration of creativity, courage and collaboration is based on Peter H. Reynolds' book The Dot, which is the…