The complete guide to using machinima in the classroom 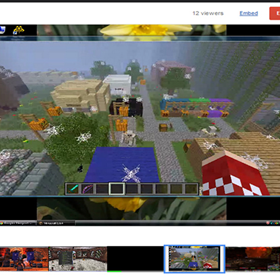 Ask any fifth grader to show you their favorite video, and you will likely see a Minecraft LP (which stands for “let’s play”) video. Chances are, when they aren’t playing games on their computers and phones, they are probably watching machinima, or DIY narrated videos that fans make in (and about) games or virtual worlds.

Wouldn’t it be great if you could harness that type of engagement for learning? Guess what? You can! Educators all over the world are using machinima — a portmanteau of machine and cinema — for its emphasis on student-created content, project-based learning, teamwork and assessment.

Although most young people create and watch machinima because it’s fun, it’s more than just entertainment. Educators and students are using this new medium in a variety of innovative ways to express ideas from literary works, music, art and performance. You can also use it to demonstrate content knowledge, document in-world activities or achievements, or examine research. For example, students are using Minecraft to re-create scenes from the American Revolution, reproduce an 18th century Russian peasant village and explore the architecture of Frank Lloyd Wright.

As with any project-based learning, machinima creation requires students to work as a team, negotiate, communicate effectively, manage time and resources, and adhere to set parameters while being flexible and taking initiative. They can use the medium to express their understanding of mathematical, historical, cultural or scientific concepts. Rather than having them take a test that assesses declarative or procedural knowledge, creating machinima allows them to be independent, self-directed learners who express their creativity while showing what they know.

The machinima products students create are also learning artifacts that demonstrate more than just content knowledge. The creation process is just as important as, if not more important than, the final product, because it addresses Common Core, state standards and the ISTE Standards for Students.

Machinima ensures that students use all the language arts, including reading, writing, speaking, listening, and the related subskills of sequencing, vocabulary, text complexity, idea development, research and creative expression. History and literature are common subjects for machinima productions, but you can use the medium to explore any content area.

How to create machinima

When you think about it, games and virtual worlds provide some of the best backgrounds for video — especially when you don’t have a Hollywood budget. They are ready-made 3D worlds that are usually free or relatively low cost and not limited by the constraints of the real world.  The players in the game are the actors, and the action is always on.

In a machinima production, the game is the set and the game characters, or avatars, are the actors. The plot unfolds in the game. Students record their own voiceovers for audio, which they can capture as they play or dub in afterwards.

The technical aspects of machinima creation provide a focus on camerawork, editing, and special and audio effects. The process can be as easy or as complicated as students want to make it, ranging it very simple real-time capture and production to advanced recording and editing with a script and multiple audio tracks, live acting, set design and musical production. Similarly, the equipment requirements can be as simple as a small laptop and some free online programs, or you can invest in microphones, large screens, external hard drives for storage and sound editing software. Because the quality of the capture and the rendering time will vary based on the software and power of the computer used, you may want to consider investing in better equipment as your students get more proficient.

For beginners, however, it makes sense to start small and build up. Here are some steps to get you and your students started in the machinima-making process:

1. Set up the student groups.

Machinima that’s created in games and virtual worlds like Minecraft, World of Warcraft or Second Life require the director and the actors to operate the game user interface and navigate the 3D environment with some facility. But chances are, many of your students are already familiar with one or more of these virtual worlds, and the rest of your class will surely enjoy learning.
Split your students into groups and them divvy up the tasks. Some common roles include:

Players. These are the students who play the game and operate the characters. Let the in-class experts strut their stuff, at least at first, while the less experienced kids take on other equally important tasks.

Writers. These students co-write the script and collaborate with the directors to complete the storyboard.

Directors. These team members are responsible for designing a storyboard that maps out the action, key shots and areas within the game when the recording will happen.

Voice actors. These students voice the characters and/or serve as narrators.

Editors. These students operate the editing software to splice together the final machinima.

One way to begin the collaboration is to give the groups 10-15 minutes to just watch the gameplay. While they are watching, they should be thinking about what they want to record and why. Once the viewing time is up, each group should spend 5-10 minutes brainstorming to decide on their purpose, the aspects of the game they want to record and/or the story they want to tell.

Keep in mind that machinima usually falls into one of three categories: storytelling, tutorials on how to play a certain aspect of the game and exploring a virtual environment. For educational purposes, storytelling and exploring work well.

Once you’ve got your team set up and the game or virtual environment running, the next thing you need to create machinima is screen-capture software. Download some inexpensive or free software, such as Camtasia, FRAPS or SnapzProX.

Typically the screen-capture software will open with a default to record the full screen. However, students can adjust the size of the recording area by clicking on one of the borders and dragging to the desired size. Next, they can just click the record button to begin. The software will let the user know how to stop the recording — usually with either a stop button or by pressing a specified key on the keyboard. Some software includes a pause button, which is very useful if students want to jump to different areas of the game without having to record the character moving to that location.

Most screen-capture software will also capture audio if you don’t have a microphone. If you do have a microphone, you will need separate audio-capture software, which will likely come with the equipment.
Once the recording stops, the computer will enter a rendering period where while it processes and generates a video file. The student will be able to direct where to save the file on the computer.

Next, students will need to edit the raw footage using video editing software. They can use Camtasia to do this as well or other free/affordable programs, such as iMovie, Windows Moviemaker or Celtx. If your students are developing more advanced editing skills and you’ve got the budget, higher-end programs like Adobe Premier and FinalCut Pro have more features and are more user friendly.

Search the software website and YouTube for tutorials that cover the basics and advanced use of your chosen editing software. However, the most effective method would be to have the student experiment and explore the software.

Here is a common editing process for machinima:

4. Add audio and other media.

You can find many premade, Creative Commons licensed music and audio tracks on the internet at sites like Jamendo, Freesound and Soundcloud. NASA even has a site on Soundcloud with shareable sounds of launches, missions and the solar system.

This part of the process provides an opportunity to discuss digital rights and ethical use. Students can research what attribution is required and include it in the credits of their video.

Students can also record their own audio using free audio editor, such as Audacity or GarageBand. Some video editing software may also have this ability under a voice narrative or narration menu.

Once they get some practice under their belts, students can begin mixing their media, combining in-game machinima with real-life video and mashing together video from several games to add interest to the story. They can also experiment with ways to create different moods using location — choosing a dark, gloomy or foggy location, for example — adding music, altering the volume of character’s voices and modifying the pace of speech.

Ready to go to the next level? Follow these links to find even more resources:

And of course, if you want to know more about machinima, the best source may be the young experts in your class. Go ahead and ask that fifth grader to show you their favorite video, and they may end up showing you one they made themselves.

Want to get more expert advice from your peers? Join one of the more than 20 ISTE Professional Learning Networks for access to year-round professional learning and collaboration, free for ISTE members.

Tanya Martin is a former primary school teacher, English as a second language and bilingual teacher, computer science teacher, teacher of gifted and talented students. She currently works as a professional developer for a large urban district. As the PD chair for the ISTE Games and Simulation Network, she coordinates the annual EduMachinima Fest.

Kae Novak is an instructional designer and student success coordinator for online learning at Front Range Community College in Colorado. She chairs the ISTE Games and Simulations Network. She was chosen as the 2014 Edovator of the Year in the Readers’ Choice Awards by the Virtual Education Journal, and she has co-authored chapters on game-based learning as well as student engagement in immersive environments and pervasive games.

How To Start an Esports Club

Esports is a mammoth and growing ecosystem that includes game publishers, streaming platforms, products, leagues, tournaments and more, all of which add up to a $20-billion-a-year industry. It’s an engine that’s fueled by teenagers and young adults. In fact, more than…

To flatten the curve when the COVID-19 pandemic hit, we were all encouraged to stay home as countries across the world shut down schools, businesses, churches and events. That’s why the World Health Organization (WHO) recommended we stay inside and play games instead, using the…