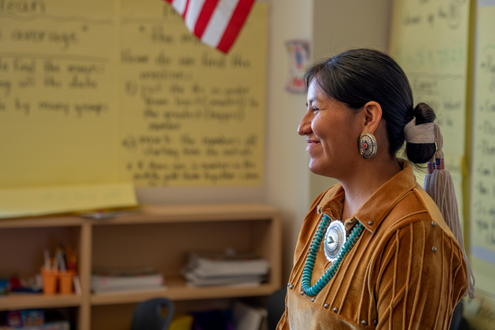 The only problem is that the First Thanksgiving story about how Pilgrims and Indians sat down together to enjoy the harvest meal is inaccurate and compresses diverse and varied tribes into a single image of a Native American.

That distorted narrative of history has been circulating for centuries, and it’s not just a harmless tale, says Francis Vigil, a Pueblo of Zia, Jemez Pueblo, and Jicarilla Apache, who is tribal education specialist for the National Indian Education Association.

“Because Native Americans are not telling Native American history, it often doesn’t tell the full story,” he says. “From the taking of our lands to relocation to boarding schools, that history is not always told.”

Even as the United States has its first Native American secretary of the interior in Deb Haaland, the contributions of Native people are rarely mentioned outside of state history classes. In reality, Native Americans have contributed much to how the country approaches economic development, environmental science and governance since colonial days, Virgil says.

It’s important that educators tell the stories from multiple points of view. Below are 15 historically accurate and culturally respectful resources for including Native American people, history, art and culture into your classroom all year.

EDSITEment!, a project of the National Endowment for the Humanities, provides this teacher's guide. Lessons include a guide to investigating local history and the diversity of the many Native American tribes.

This joint project between the National Park Service, the University of Oregon, and the Lewis and Clark National Historic Trail offers a digital collection of resources for different grade levels, including original materials created by Indigenous curriculum designers.

Lessons of Our Land

The nonprofit Indian Land Tenure Foundation (LTF) developed these lesson plans for grades PK-12. The more than 200 lessons include histories, languages and cultures that center Native American issues and values while emphasizing the fundamental relationship between all people and the land.

Listening to Wampanoag Voices Beyond 1620

The Peabody Museum of Archaeology & Ethnology offers this online exhibit and podcast. Four centuries after the arrival of the Mayflower, the introduction reminds us that “Colonization happened to, not for, the Wampanoag.”

The Library of Congress worked with Joy Harjo, member of the Muscogee (Creek) Nation and Poet Laureate of the United States, to map the U.S. with Native Nations poets and poems. “I want this map to counter damaging false assumptions — that indigenous peoples of our country are often invisible or not seen as human. You will not find us fairly represented, if at all, in the cultural storytelling of America, and nearly nonexistent in the American book of poetry,” says Harjo. Educators can use the map to find a Native American poet near their community.

This site provides a tribal directory for those looking to contact a particular tribe. Vigil notes that tribes are sovereign nations, self-governing entities, so there needs to be some specificity when you reach out. “These relationships need to form over time,” he says. “There are some tribes that are very protective with their cultures because we’ve been attacked. It’s about relationship and trust.”

National Museum of the American Indian

This Smithsonian project offers a resource guide for teachers in grades 4-8 that provides American Indian perspectives on Thanksgiving.

This site features virtual field trips and educational resources about tribes in New York, the Great Plains, the Southwest and Pacific Northwest.

Project Archaeology provides a database of shelters used by tribes all over the country with a corresponding lesson plan. If you’re eager to delve deeper into national monuments, they offer a lesson plan for that, too.

Native Narratives: The Representation of Native Americans in Public Broadcasting

These narratives from the American Archive of Public Broadcasting explore  how Native Americans are portrayed in the media.

The Museum’s resources for teachers include digital and primary resources and professional development. You are the Historian: Investigating the First Thanksgiving is an online game that “investigates the interactions between the Wampanoag people of Patuxet and the earliest colonists known as the Pilgrims by exposing players to archaeological artifacts from the museum’s collections, primary source documents, and oral stories told from generation to generation.”

Teaching the Truth About Native America

This University of Massachusetts project began with a focus on New England tribes but has expanded nationally. The website includes 10 Tips to Decolonize Your Classroom, Key Concepts for Native American History, and a database that lets educators search by grade level, subject area focus, and state to find a lesson plan appropriate for a specific classroom.

Based on the history highlighted in Howard Zinn’s book, A People’s History of the United States, this website offers free lesson plans organized by theme, time period and reading level. Examples include “Discovering Columbus: Re-reading the Past” and “Teaching Climate Disobedience: Using the Film Necessity in the Classroom.”