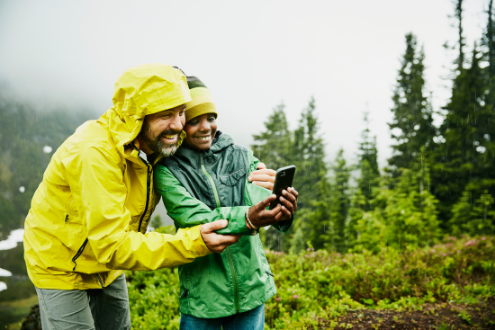 Scientists have always been reluctant to attribute extreme weather events to climate change. Weather is different from climate, they say, and extreme variations aren’t unusual.

However, climate change is here, and those extreme temperatures and unprecedented storms just might be symptoms. As might be smaller changes, such as an early arrival of mosquito season or a sighting of a bird outside its usual habitat. It’s those kinds of changes that the citizen science project ISeeChange is documenting.

ISeeChange was founded in 2012 by Julia Kumari Drapkin, a journalist who had spent time covering climate change in Washington, D.C. She grew frustrated with the lack of action on climate change when evidence seemed obvious, like consecutive years with billion dollar weather disasters.

She couldn’t understand why in the age of satellite sensors and social media that effects of climate change couldn’t be pinpointed.

“Why couldn’t we say, ‘Let's create a system that is bottom up and meet the models halfway?’” she said. “Why can't I have a network of people saying, ‘Hey, look at this. Is this climate change?’ And then have it investigated as if it was like a mystery or an opportunity.”

From its start as a Word Press website in 2012, ISeeChange has grown into a sophisticated platform that operates across devices. It is a partner with NASA, and has users throughout the United States and in 128 countries.

ISeeChange is open to anyone. In schools, ISeeChange allows teachers and students “to tackle the large topic of climate change through real examples from their backyard,” according to the project’s website. Students can post photos or text descriptions of weather and changes in the environment. There are categories on the website for different conditions, such as extreme heat, coastal erosion and flooding, bugs, snow and ice, and wildfires.

Drapkin says using ISeeChange in schools is a chance to add climate change to the curriculum and encourage inquiry-based learning. For example, a school in Connecticut documented the yo-yoing winter temperatures, which coincided with a rise in student illnesses. That led to a science teacher posing the question of whether the two could be related.

“One of the great things about ISeeChange is that it’s a digital virtual tool,” she said. “You can use ISeeChange in the process of observing, asking questions and answering questions in any aspect of the science curriculum.”

Drapkin encourages users to go beyond simple weather data. ISeeChange is particularly interested in stories about how the changing climate is affecting people on a personal level.

“We really want people to tell a story about how weather and climate is impacting their lives,” she said. “Don't just take a picture of a temperature gauge and say, ‘Oh, it’s 70 degrees today.’ We can always find the temperature for that day in your community. We want to know what the temperature means to you. How is your life intersecting with nature? How are your habits changing? Tell us about the things you’re noticing that are surprising.”

Drapkin says one student in Connecticut noticed that high temperatures were affecting her ability to practice the piano. She tracked her time practicing and found it steadily declined as a heat wave persisted. Another student in Boston noticed an unusually large number of squirrels around, which led to his inquiry about whether a dry summer, mild winter and early spring contributed to the influx.

“It was a really good observation,” she said. “We love to see things like that. It’s actually creating a habit. We want young folk to appreciate that they're part of a generation that will be experiencing more change in their lifetime than any of us.”
Drapkin also encourages students to talk to older members of their communities and post their thoughts about climate changes they’ve seen.

“We really want that intergenerational transfer of knowledge to happen,” she said. “So, we want young people reflecting on change alongside older members of the community.”

Students can also participate in specific projects for which ISeeChange seeks eyes on the ground. It has teamed up with the city of New Orleans to track summer heat, the city of Miami to track flooding in neighborhoods, and the North Carolina Coastal Federation to track coastal flooding. The goal of those projects is to gather information that will guide solutions.

Scientists have always been reluctant to attribute extreme weather events to climate change. Weather is different from climate, they say, and extreme variations aren’t unusual.

However, climate change is here, and those extreme temperatures and unprecedented storms just might be…