Touring the heavens with NASA through the lens of a smartphone 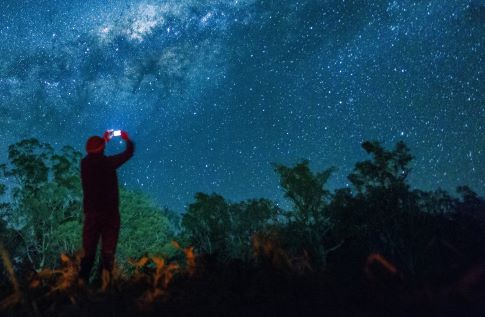 One of his projects uses the sensor that orients a smartphone’s screen to measure gravity at different latitudes.

Another uses a smartphone’s microphone to take sound measurements to map out quiet places around the world.

His latest project uses smartphones to take photographs of celestial objects through a telescope. It was organized with an eye on Citizen Science Month in April.

And to expand the reach of the project he has partnered with the Library Telescope Program, which provides telescopes to libraries that are loaned out to patrons. More than 300 libraries in 44 states are involved in the program.

But you don’t have to take a loaner to participate. All you need is access to a telescope and an adapter to attach a smartphone to the eyepiece. Those adapters are about $15 and are provided with the library telescopes.

The project is not technically “citizen science” since the photos collected by the public aren’t intended to be used for research. It’s what Odenwald calls a “citizen explorer” project, a fun endeavor that’s meant to inspire interest in science.

“We're not expecting to get any cutting-edge, Nobel-quality science out of it,” he said. “It's just a response to a very large public interest in wanting to take photos through the eyepiece on these loaner telescopes. We decided to make it a semi-formal project where they can upload the data they take and become part of a crowd-sourced group.”

“I’ve learned from the people who run the telescope loaner program that one of the first things people do after they set up the telescope is to point it at the moon and take out their smartphone and take a photo through the eyepiece,” he said. “That’s a physical skill even 8-year-olds have.”

Instructions on how to participate in the project are available at darksky.scistarter.org. Odenwald also has put together a one-page introduction to astrophotography that offers tips on how to get the best results.

Although it’s considered an “explorer” project, the results could be the basis of true citizen science projects in the future.

One such project is just getting off the ground. Odenwald is working with the International Dark-Sky Association and the Globe at Night program to use smartphone photos to track light pollution. The program currently relies on observations using star maps or specially designed light meters.

Another potential project, Odenwald said, is to track the effects of SpaceX satellites on the night sky. SpaceX’s Starlink project aims to launch thousands of satellites into low-orbit to provide internet service on Earth. Astronomers are worried that the light reflected by the satellites will disrupt observations of cosmic objects. A potential citizen science project could track the change in the night sky over time caused by Starlink’s constellations of satellites, Odenwald said.

Jerry Fingal is a freelance writer who covers technology, education and business.

Ever wonder if a sponge soaks up water in space the same way it would in your sink?