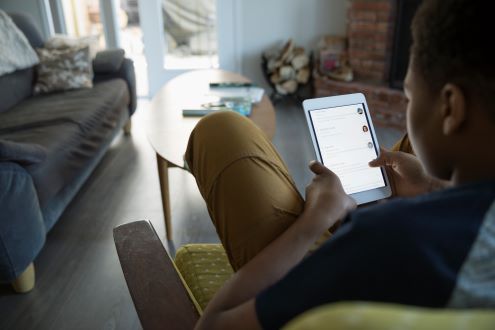 John Dewey, the influential education reformer and psychologist, is often quoted as saying that we don’t learn from experience, we learn from reflecting on experience. That statement applies just as much today as it did in Dewey’s era. To encourage students to become critical-thinking digital citizens, they must be able to reflect on what they see online and on their own online behavior. We must instruct students to think about what they do online, why they did it and how they could do it differently.

Reflection is a vital part of experiential learning, educating through direct, firsthand experience. Educational theorist David Kolb built upon the ideas of Dewey to develop the experiential learning model. The second step Kolb articulated was “reflective observation.” After the experience, learners should stop and reflect. After they reflect, they should engage in “abstract conceptualization,” connecting that experience and their thoughts to other knowledge they have. This is part of being a knowledge constructor, which is the third standard within the ISTE Standards for Students. This standard states, “students build knowledge by actively exploring real-world issues and problems, developing ideas and theories and pursuing answers and solutions.”

The practice of reflection and abstract conceptualization was used by Digital Respons-Ability, a mission-based company, with several classes of middle-schoolers and high-schoolers. As part of a digital citizenship class, students were encouraged to examine their digital identities.

Digital identities are included as part of the second ISTE Standard, Digital Citizen, where “students cultivate and manage their digital identity and reputation and are aware of the permanence of their actions in the digital world.” This is a particularly important topic for middle-schoolers as they venture out further, creating their own personal accounts and interacting more online.

Digital Respons-Ability created a digital identities activity for grades 7-12 as part of its digital citizenship curriculum. This activity is done toward the end of the series of classes, and encourages students to think critically about their own digital identity and how future colleges and employers may perceive that identity.

First, create a fake identity on a fictional character using one of these websites:

Note: There are a number of fake message generator sites online. Some have a lot of pop ups and want you to download things or watch an ad. Pick the best one for you.

Next, make up a fake resume for that character. Make it one sheet and simple, using a template.

Classwork: Divide the class into three large groups and assign each one fictional character. The Joker or Wonder Woman have been popular with our students. The fictional character could come from a book, movie, TV show or video game. Tell the students that they are hiring for a position, and this is the candidate. Pass out copies of the character’s fake identities. Have the students look at those identities and discuss as a group.

Next, pass out a fake resume for each character. Have the students reflect on what they see on the digital footprint vs. the resume. Bring the students together for a large group discussion.

I’ve learned a lot from teaching teens about digital identities. I thought more students would feel that it’s unfair that those in power would make decisions based on online activity. However, many of the students accepted it. Perhaps they are simply used to having their identities online, and since they look up people, they expect to be examined as well. Students were savvier and more knowledgeable about the concept of digital footprint than I assumed.

Through this lesson, many students have learned that you can “game” the system, that you can push back against a negative digital identity. At first, some of the teens thought there wasn’t a lot you could do if you made a mistake or someone lied about you online. By discussing algorithms and how some content can push down other content, students could see a more positive perspective on the concept of digital footprint.

The students taught by Digital Respons-Ability are typically from Title 1 schools, which may impact their perspectives and personal reflection. There also have been some barriers in terms of access. Karina Gathu, a training specialist with Digital Respons-Ability, said, “I think for these kids in particular, it’s a little harder because most of them don’t have smartphones and they do use social media, but it’s not the same as for the more middle class kids.”

The power of reflection in digital citizenship

Teaching digital citizenship pushes students to move beyond consumption to creation. But to create, we must understand and know the subject. We must experiment and reflect. By reflecting on the digital identities activity, students can use the lessons provided by the fake content in their own lives. They can move from consuming the content others have created to evaluating their own digital footprints and eventually creating their own content for others to consume.

The practice of reflection can be applied to numerous disciplines and activities. Kolb suggests some general questions that can be used with any subject. While teaching is a busy, time-consuming activity, take a minute to stop and ask one of these questions:

When teaching this activity to one group of middle-schoolers, there was one student who rolled their eyes and said, “I’m not old enough for a job.” The idea of college and a job may seem a long way off to a 13-year-old, but it is just around the corner.

Carrie Rogers-Whitehead is the CEO of Digital Respons-Ability. Her company uses the prevention science model in digital citizenship student workshops and parent trainings.