Interview: Manoush Zomorodi on Where Technology Is Taking Us 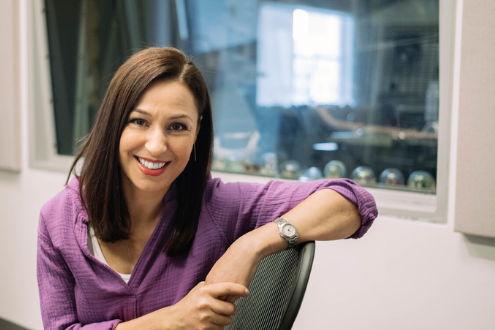 Journalist, author and entrepreneur Manoush Zomorodi says she found her true calling about a decade ago when she became a podcast host. A former breaking news reporter for the BBC and business and tech reporter for Reuters, Zomorodi describes falling in love with podcasts because they do so much more than deliver facts.

“They deliver emotion, they deliver intimacy. We go shopping together. We go jogging together. We’re buds. I had never had that happen to me before as a broadcaster,” she described in a session on human skills for digital natives at ISTE19.

Starting in 2012 with her podcast “Note to Self,” a tech show about being human, she began to explore how apps, smartphones and social platforms were changing what we value, how we learn and what we believe in.

Three years later, she and her followers ran an experiment to unplug from their devices. Her book, Bored and Brilliant: How Spacing Out Can Unlock Your Most Productive and Creative Self, is a result of what they learned. She followed that up in 2018 with “The Privacy Paradox,” a five-part plan to help people take back control over their digital identity.

Yet the questions regarding technology’s influence run deeper than merely rearranging screen time, so in 2018, Zomorodi and co-founder Jen Poyant opened the doors to Stable Genius Productions, a media company with a mission to help people navigate personal and global change. Stable Genius uses podcasts as a lab to test new ways journalists can educate, entertain and inspire through narrative.

Manoush Zomorodi says that giving ourselves permission to do nothing often leads to working smarter and being more productive.

It’s the logical next step for Zomorodi’s media career, which covers 10 years as a reporter and producer with the BBC, including a two-year assignment in Berlin, before she returned to Brooklyn.

When CNN Tech asked Zomorodi for her advice to her 18-year-old self, she quipped, “Take an economics class. And don’t worry too much. It will all come together.”

Indeed, she accepted a modern risk when she launched Stable Genius Productions by banking in part on blockchain.

“It really kind of reminds me of if you got into your covered wagon and you were like, ‘We’re going west and we’re gonna look for gold,’” she said on an episode of “Recode Media with Peter Kafka.” “If there’s gold in the hills, then you could build a home- stead, right? And if there’s not, you’re kinda screwed.”

In 2019, ISTE sat down with Zomorodi to get her detailed view on where technology is taking us and how we can make sure it’s a positive experience for our daily lives.

Who are some of your role models?

Kara Swisher is a lady-tech-journo powerhouse. I also admire Gwyneth Paltrow for looking beyond her personal career and building a movement (to be clear, I don’t agree with some of the content, just her entrepreneurial acuity).
My kids’ teachers have also been amazing.  Resilient and kind.

In your book bored and brilliant and in a ted talk, you discuss harnessing the hidden benefits of boredom to become productive. What tips can you share for doing that in the connected, always moving world we live in?

Don’t feel guilty about doing nothing. When I did research for my book and better understood how much productivity stems from allowing our brains to take time to process articles, conversations and moments, I was able to give myself (and my readers) permission to be less “on” all the time.

Your podcast, “Note to Self,” is described as “the tech show about being human” where you explore society’s relationship to technology. What have you learned so far about how we can live better with tech?

Always be asking: Is this tool, service, platform helping or hurting me? Is it making my life more efficient or connected, or bogging me down/overwhelming me? If you aren’t sure, do some self-xperimentation. Take a break and honestly reassess.

How can we preserve our humanity in the digital age? How do we help students to the same?

By remembering to include various human states that technology doesn’t prioritize: face- to-face conversations, having eye contact, taking time to allow our minds to wander and consuming nuanced media like books.

We can’t always put metrics on emotions like empathy, but caring for each other is what makes societies function and gives our lives meaning.  It’s easy to forget in a world that rewards “follows,” 10x returns and massive initial public offerings (IPOs).

How can we get kids to care about privacy and take steps to protect it?

This is a complicated question but I think it starts with parents giving their kids some privacy. I’ve come to believe that kids can’t appreciate privacy until they’ve experienced it in a relatively safe situation, like walking home from school without being tracked. What does it feel like to be alone? A lot of kids don’t even know or are fearful of it.

We need to let kids know it’s OK to think uncomfortable, even subversive, thoughts. That’s what critical thinking is. You need space to talk to yourself (in private) to figure out what you believe in and then trust your- self to act ethically.

Giving kids some private space now can help them grow up to be adults who under- stand the value of privacy on a global scale.

How do you feel about the power of stories and what suggestions might you have for educators who are trying to find their voice to tell their stories?

Start with observing a small moment in your life that struck you or an anecdote that you can then connect to the bigger lesson or the point you want to make.

Full disclosure. I gave a TED Talk and used this small moment technique. It’s the moment where it doesn’t matter if you’re Republican or a Democrat, or you’re for gun rights or not. All the other things that divide us. It’s a small human moment that happened to you.

So in my case, I told the story about pushing my child’s stroller. This baby was so colicky that he would only sleep if someone was pushing him, and I would try to actually take naps while I was pushing, like I lost my mind. But that moment of tedium and misery, whether you’re a parent or not, you know, you can relate to it in some way.

And then you relate to me. And then as I go on to tell you about how that moment radically changed the direction of how I decided to go with my journalism career and the research that I ended up doing and some of the bigger sort of ideas that I’ve come to. Whether or not you agree with things I’ve said on this podcast, at least you relate to me as a human and there’s empathy between us and we’re listening to each other and we can agree to disagree, but we still can treat each other with respect and kindness.

Absolutely. But we all need fresh air and breaks from “good” screen time, too.

Educators are called on to do so much in the classroom and after the school day ends. Do you have any suggestions for how they might get a greater sense of control of their digital or analog lives?

I have so much gratitude and respect for all the work educators do, in and out of the classroom. I guess I would first share a mantra I’ve been saying to myself: You can’t do it all. There will always be future opportunities, innovations and projects.

Then I would say try to reflect more on what you are doing than what you wish you were doing.

But I’d also share the great news that doing nothing is actually working smarter and being more productive. Give yourself permission to not just turn it off. Relax your mind, relax your body. Maybe go for a walk. Just think and process and reflect on what has happened to you all week long because I think a lot of us confuse being productive with being reflexive or reactive.

We think that when we’re doing more or checking more things off our checklist or letting people know what we’re working on, where we’re at on a project, for example. All of that sometimes keeps us from seeing the big picture about where we can decide to do work that really speaks to the things that matter the most.

I would also just say, as a mom who owns her own business, my new thing that I say to myself is, “You’ve done as much as you can possibly do today. There will be more opportunities tomorrow.”

You mentioned in an interview that if you could pitch to one person, it would be former Secretary of Education John King Jr. What did you want to share with him?

I’m thinking a lot about how we teach kids to be good digital citizens. I’d love to hear his thoughts on that.

And when I mentioned John, it was at a point where a lot of the things that I was researching about technologies, effects on learning in the classroom, human development and brain plasticity was not really being talked about in classrooms and I felt like it was really important, that it was the secret question that everyone was asking themselves.

Like is it cool that we’re like on phones and laptops all the time? It is good to teach kids this, isn’t it?
Now those questions are being asked and I think ISTE is leading the way in terms of trying to figure out how do we create structure for teachers who are overwhelmed all the time. How do we turn our students into critical thinkers about technology and to good digital citizens? How do we make sure that our human rights are reflected both offline and online?

At the time I felt like we needed to figure this out. And now we are, so that’s exciting.

This is an updated interview that was originally published on Sept. 25, 2019.

Podcasts are such an easy way to learn something new, become inspired or just be entertained, but it can be difficult to choose a good podcast because every time you turn around, there’s a new one being hyped.

Sep/16/2022
podcasting
Get Your Students Creating Their Own Podcasts

Tai Poole has been hosting the podcast series Tai Asks Why? with the Canadan Broadcasting Company (CBC) since he was 11. Each episode is under 30 minutes and delves into thought-provoking topics like:…

Mar/01/2021
podcasting
Interview: Manoush Zomorodi on Where Technology Is Taking Us

Journalist, author and entrepreneur Manoush Zomorodi says she found her true calling about a decade ago when she became a podcast host. A former breaking news reporter for the BBC and business and tech reporter for Reuters, Zomorodi describes falling in love with podcasts because they do so…