Get in the game: Winning isn't the only goal with classroom games 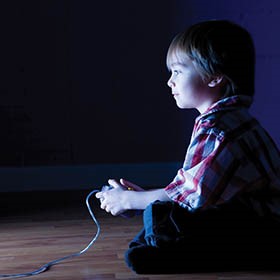 School isn’t fun when you’re failing. However, failure is part of learning, so every student needs to learn how to fail positively and find ways to use the mistakes as stepping stones to success.

A growing number of educators are turning to game-based learning as a way to better engage today’s students and do just that. And we’re not talking about a round of Sorry!

“In traditional education, if you get less than half of the answers correct, you’ve failed,” says Tanya Martin, coordinator for professional development support at Broward County Schools in Florida and professional development chair for the ISTE Games and Simulations Professional Learning Network. When playing games, however, students learn how to strategize as they learn skills. If they make a mistake, they get to try again and figure out what to change in order to reach the next level.

“Games have a formula,” Martin adds. “They tell you when you are ready to move up to the next level.” Gamers see a positive trajectory, even if it takes several tries to reach that point.

Compare that to traditional grading, where early failures doom you for the entire year or beyond. “Failure in a scenario shouldn’t doom you, and in the game scenario, it doesn’t. It is all part of the learning process, with communicating and collaboration skills added in,” Martin says.

Gaming in the classroom

Using games as a tool to enhance learning isn’t a new concept. In the past, educators used board games like Monopoly and Scrabble to help students improve math and vocabulary skills. At the same time, playing a game in class was a special event, often bestowed on the students who least needed the extra (and more stimulating) help.

Today’s game-based learning is all about bringing online games into the classroom. Sometimes the games are specially designed for educational purposes – although Martin warns that too often these games are as exciting as old-fashioned flash cards – but ideally, they are the same commercially offered games that kids are playing at home, like Minecraft and World of Warcraft.

Essentially, game-based learning is taking a game and using it alongside your curriculum, explains Trish Cloud, technology associate at Grand Oak Elementary School, Huntersville, North Carolina, and an ISTE member. Minecraft is her go-to game for the classroom environment. For example, her school’s fifth grade math program includes fractions. “I worked with our math facilitator, and she created a lesson with the situation where the students were ‘hired’ to build a town based on certain criteria, like one-third of the buildings had to be grocery stores and another third had to be clothing stores, and of those buildings, a fraction of them had to be dedicated to a particular product,” Cloud says. The students used a particular type of block in Minecraft that allowed them to see how the fractions worked. Once they understood the concept through the game, the students had to reflect on how they came up with their solutions and show the work.

Being a gamer helps

Cloud is a self-described gamer, having played Minecraft and World of Warcraft. When she was first alerted that she’d have iPads to use in the classroom, she immediately began to lobby her principal to allow her to add Minecraft to the tablets and to computers. She then created an after-school Minecraft club with a $10 joining fee that covered the costs of adding the game to the devices. “Bringing it in as a club showed the teaching staff how enthusiastic kids were about playing the game,” she says. Her own Minecraft experience gave her insight on how to best incorporate the game into the classroom environment and how to generate interest among the students.

It was definitely a plus when it came to selecting the right software.

“You want to make sure that the game covers the correct concepts, engages the students and has a difficulty level to it, otherwise the win-loss risk never kicks in, and then it is just play,” says Kae Novak, chair of the ISTE Games and Simulations PLN and instructional designer for Front Range Community College in Denver.

Douglas Kiang, a speaker and computer science teacher at Punahou School in Honolulu, Hawaii, doesn’t think that teachers need to have gaming experience – and he doesn’t believe that many are gamers – but they should have some basic concept of how gaming operates. “Be willing to experiment and learn,” he says. When teachers take an active and personal interest in the games, the students pick up on that and they become even more engaged in the overall experience.

If the teacher doesn’t have much personal gaming experience, Novak recommends taking advantage of the ISTE gaming community and resources. “See what other teachers and schools are doing,” she encourages.

Also keep in mind how you want to use the game in the classroom setting. Is it going to address one core subject and focus on one type of skill, or do you want it to span across several subject areas? Beyond its popularity with school-aged children, one of the reasons Minecraft is the game of choice for so many teachers is because it can be easily used for virtually everything in the curriculum.

While adding games to the curriculum reinforces the skills that make for better learners, games also help improve social skills. They can be ice breakers early in the school year, when students are just getting to know each other. And teachers can use them to create a connection with the community as a whole.

For example, Kiang tells the story of a student who created an app for the mother of an autistic child. It is now available in Apple’s store, and it was all due to using game-based learning to help engage the student in project-based learning and to encourage risk-taking.

The concept of gamification is often intertwined with game-based learning. Gamification builds on some aspects of gaming, but there are real distinctions between the two areas.

“Game-based learning is building a curriculum around the game,” says Kiang. “Gamification is taking what works well in games, taking the aspects of games that make them addictive, and using those dynamics in your teaching without actually using a game.” In other words, you can use all the techniques of a game but never play a single game in the classroom.

With gamification, teachers can recreate much of the competition angles, such as setting up leader boards to see how students are competing head to head on a project or incorporating a reward system like badges and points toward a certain goal. Outside of the school setting, stores use gamification when they issue loyalty cards and airlines use the concept with frequent -flyer miles. In schools, it is used to help motivate students to achieve in traditional academic settings.

There are several specific game dynamics that work best in gamification, Kiang says. One example is the failure dynamic, which circles back to one of the positive aspects of game-based learning: the opportunity for students to learn how to work with and learn from their mistakes.

“In a game like Angry Birds, you don’t want to win every level on the first try. That takes away the fun of the game,” says Kiang. “But we can’t say the fun part of school is failing on the first time on a task.” Using this dynamic in gamification, students are given the chance to try again and again until they get it right in order to get their badge or reward.

Another dynamic used in gamification is deployment. It’s basically a “be here at a certain time and get an award” technique. Kiang simplifies it even more. “In the real world, we call that happy hour. The tavern is always the same, but if you show up between certain hours, you get special prices.” In the classroom setting, he uses this dynamic to encourage students to show up for review parties. He sets up a time for students to gather online to watch a video together and to engage in a back-channel chat. Even though the review party is optional, setting it up as a special event makes kids want to attend.

There is a downside to using gamification, however. If students already have a passion for a particular subject, the reward system won’t motivate them as much. But then, figure that students with a passion are already highly engaged, so gamification techniques do their job in adding extra spice and incentive to students who need it.

Machinima is another technique that involves game playing. It uses screen capturing software to record scenes in video games or any 3D virtual world. “Think of it as movie-making, but you are doing it based on what’s happening on a screen,” Novak explains. “You can do the same editing you would for a documentary.”

Machinima is growing in popularity among students and teachers. It provides opportunities for students to work together on projects based on their game experience, while adding areas like writing scripts and demonstrating their knowledge in specific subject areas.

Game-based learning and the offshoots like gamification and machinima are gaining support in the classroom, but Larry Johnson, CEO of The New Media Consortium, believes there is still a long way to go before it is a mainstreamed teaching tool. Right now, he says, games still haven’t caught on in terms of being turned into specific educational tools.

“What is needed are people who get gaming and can help the rest learn how it is best applied, when it should be applied and how to make it a part of the learning ritual,” says Johnson. “I think it has a good shot at entering the mainstream.”

For that reason, Broward County’s Tanya Martin encourages teachers to participate in programs that focus on game-based learning. Taking a course in game design would be a helpful professional development tool, as well.

Games give educators a new way of teaching that adapts to a new generation of students and technology. “Games today are what TV was to kids a generation or two ago,” says Trish Cloud. “If kids learn coding, for example, they are doing it to develop their own games.”

And, no matter what teachers or their parents may think about giving kids too much screen time, it’s important to remember that gaming is not passive – and today’s students don’t respond as well to passive activities like worksheets. Kids who play video games are constantly plotting and learning. That active learning should easily commute from their personal mobile devices into the classroom setting.

So if kids are already using game-based learning in a casual setting, Cloud asks, shouldn’t they be able to use a tool they like and are familiar with to help them achieve a better learning experience in the classroom?

“If you take a good look at game-based learning,” she adds, “you’ll see that it can completely change the way kids master a topic.”

And no one fails when they’re having fun.

4 Ways to Personalize Reading for All Learners

Mar/17/2018
Digital Citizenship, Gamification
Weigh in on the ISTE Standards for Administrators

“Leaders get people moving. They energize and mobilize. They take people and organizations to places they have never…