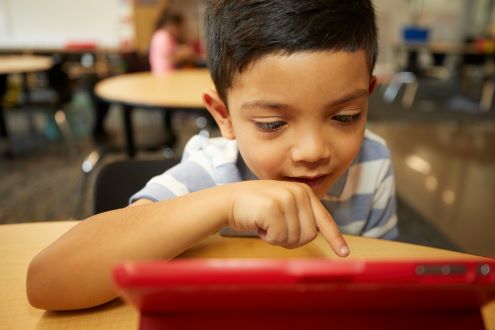 So she did. The first year, she and her students began to learn coding along with essay writing. Before long, they were programming robots to act out the hero’s journey.

“I kind of fell in love with it,” she says. “From the first moment we did something on the iPad, I saw a higher level of engagement from students. There was a deeper learning that I started to see happen. I felt like it opened up more of the world and allowed some opportunities I would never have tried in the classroom.”

Having pioneered her own tech integration journey, Guyon serves as a guide for other New York teachers who were thrust into a massive exploratory pilot last spring: Making the shift to online learning. As assistant coordinator for model schools at the Washington-Saratoga-Warren-Hamilton-Essex Board of Cooperative Educational Services in New York, she provides professional learning for teachers in 31 districts across the state, impacting nearly 40,000 students.

Throughout the COVID-19 pandemic, Guyon hosted virtual office hours to give teachers a place where they could drop in, ask questions and try things out. As teachers with varying technology comfort levels struggle to take their lessons online, she helps shepherd them through the basics of getting their classrooms connected and into discussions about best practices for teaching with technology.

“I feel like I’m ready for a lot of them to move past level one, especially since the pandemic,” she says. “Where do we go from here? Now that we understand how to make a Google Slide, what are we going to do with it, and how will it impact students? I want to get to where students are using technology to create, collaborate and communicate, to do things in the classroom that really engage them in the learning process.”

Guyon draws upon the ISTE Standards to help propel teachers past the beginning stages of tech integration. In March 2019, she decided to pursue ISTE Certification not just for herself, but for a cohort of more than 40 interested educators. She hosted the training and set up a Slack channel for support as they made their way through the self-paced online work. Now she uses what she learned to help teachers examine their digital lessons and activities through different lenses to determine the best way to their achieve learning goals.

“I get excited about teachers trying new things,” she says. “It gives me a window into a lot of different classrooms. I see how different teachers run their classrooms, and I see the best practices emerge as we start to understand what works well. It fuels me, makes me want to try something new.”

As someone who has used technology to teach both students and teachers, Guyon has developed the following best practices of her own:

1. Learn alongside your students

When Guyon first led her sixth graders through Hour of Code, she had never written a line of code in her life. They learned it together — and discovered a hidden expert in the room. An English language learner who rarely spoke to anyone became the day’s hero as he walked around the room and helped his peers troubleshoot their code.

By becoming a co-learner, teachers empower students to take charge of their own learning while also modeling the habits of a lifelong learner. For educators who feel outside of their depth with technology, simply saying, “Let’s learn it together” can lead to powerful experiences.

Students don’t get better at something by listening to a teacher deliver a lesson. The real learning happens once they start practicing the skill. Breaking subjects down into 10-minute mini-lessons followed by an activity or practice period helps make learning more digestible and gives students the opportunity to try out new information right away.

Learning to code may not seem like an obvious fit for an English classroom, but Guyon quickly saw its value — and didn’t hesitate to point it out to her students.

“Kids never want to rewrite and fix their work, but when they have a robot on the floor and it’s not moving, they’re going to rewrite until they get it right. Now they see the purpose of editing — as long as you bridge that correlation for them. I’d tell them to think of it like code, and then it was a lot easier to get them to edit their essays.”

When teaching a new technology to either students or fellow educators, Guyon doesn’t deliver much instruction beyond how to log in. Then she sets them free to explore. Once they’ve had time to play around with the app and figure out how it works, she starts building the lesson from there.

“A lot of times it’s just a matter of getting out of the student’s way,” she says.

Nicole Krueger is a freelance writer and journalist with a passion for finding out what makes learners tick. This is an updated version of a post that originally published on June 24, 2020.

The past couple of years have brought tremendous disruption to the world of education, leading to teacher burnout, student anxiety and parent frustration.

But out of all the upheaval some amazing opportunities have emerged. Here are five innovative trends in K-12 education to look out…

Like many aspects of education, assessments have looked the same for a long time. Typically they take the form of an end-of-unit test or something more immediate, like a quiz using a digital platform like Kahoot.