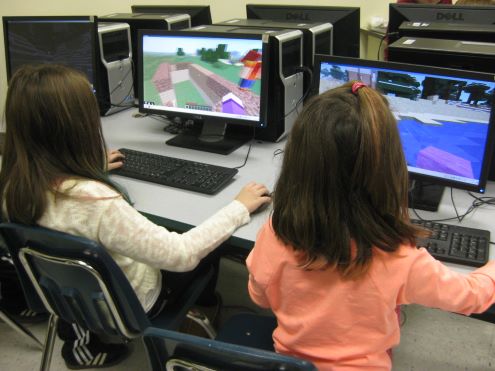 Scott Merrick clearly remembers the moment he realized Minecraft Education Edition was working in his classroom.

“I looked around the room – a computer lab with 30 computers – and every kid was engaged,” he said. “I clearly remember extending my hands to the sky like a meditator and scanning the room. And they were all involved.”

Merrick is the technology teacher at McMurray Middle School in Nashville, Tennessee. He was part of the pilot program as the Metro Nashville Public Schools rolled out Minecraft Education Edition districtwide.

He now uses Minecraft to teach coding and other concepts to 200 students every nine weeks. His school’s block scheduling means he has eight different classes covering four grades at all times. He is unabashedly sold on Minecraft Education Edition.

His students, he said, are getting a full dose of the 4Cs – critical thinking, creativity, communication and collaboration.

“They’re being creative in almost everything they do,” he said. “They’re communicating with their fellow students and me about what they’re doing. They're learning patience and they're learning they don’t know everything. They can make mistakes. It's just a whole lot of what I like to call collateral learning going on.”

His experience with Minecraft led Merrick, a longtime and active ISTE member, to organize the webinar “Walk the Walk: Step-by-Step (Virtual) Tips for Using Minecraft Education Edition.” Merrick says he’ll share how Minecraft “made it possible for a teacher limited by budget, access and hardware constraints to implement a successful learning experience in a virtual world for 200 students a quarter.”

Merrick is now in his third quarter of teaching Minecraft. As he prepared to launch Minecraft in his classroom, Merrick, a self-avowed early adopter, said he was little intimidated by the ins and outs of using the virtual world. He decided he’d just dive in.

“I learned how to do it as I was doing it,” he said. “I learned a whole lot by just diving in. It’s pretty darned intuitive. You just have to be brave and fearless and not worry about making mistakes, of which I’ve made many.”

It worked out. In hindsight, Merrick said he probably should have taken advantage of the “amazing resources” for teachers on the Minecraft Education Edition website. There are lesson plans and plenty of training and help available.

In Merrick’s classes, students learn about coding by using Microsoft Code Builder, a block coding system that Merrick likened to Scratch or Tynker.

Part of the appeal of Minecraft is how it engages students. Merrick said he recently had a student from Guatemala who spoke no English and couldn’t read Spanish. And she’d never held a mouse. With the help of another student, she was soon navigating her way around a Minecraft world.

“That just speaks volumes about how easy it is for kids to do that,” he said.

“Most kids eat up, but there are a few who are reluctant,” he said. “I’m still trying to figure that out.”

His students keep him excited about teaching.

“I should be retired. I’m almost 70 but I love what I do,” he said. “I feel like I’m doing a lot of good for these kids. If I can pull some into this coding thing -- and I see some already going there –- that could pull them out of the economic situation they were born into. Even if that happens to just one of them, it’s worth all the work.”

“If nothing else, teachers might want to explore on their own to see the vast potential,” he said.

Jerry Fingal is a freelance writer in Eugene, Oregon, specializing in education, technology and business.

Scott Merrick clearly remembers the moment he realized Minecraft Education Edition was working in his classroom.

“I looked around the room – a computer lab with 30 computers – and every kid was engaged,” he said. “I clearly remember extending my hands to the sky like a meditator and…