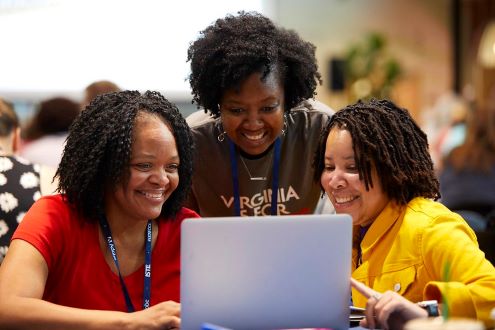 When Leslie Fagin transitioned from being a high school English teacher to being a district instructional technology coach, she suddenly found herself without her people.

“I knew how to use technology effectively, but I felt like I was all alone,” said Fagin, an instructional technology coach for the Griffin Spalding County School System in Georgia. “It was not until I started getting involved in Twitter chats and the Edtech Coaches PLN that I was able to realize there are other people out there doing the same job. Instead of trying to figure out how to do these same things, I could reach out and get answers.”

While teachers in a school district can have hundreds of colleagues, tech coaches have a much more limited circle. In the district where she works, Fagin is one of two tech coaches for 18 schools and 10,500 students. Tech coaches have to reach out to others for support.

So, naturally, when Fagin, who is a leader of the ISTE Edtech Coach Network, weighed in on what she thought should be included in the coaching section of the ISTE Standards, she focused on collaboration.

“My priority was the piece about being connected to others,” she said.

“The biggest changes to me are that they are more specific in what they are suggesting are best practices for coaches,” she said. “To me, they were a little ambiguous before.

“The language is fresher and it's a lot more relevant to what we're doing as coaches,” she said. “Just like technology is ever changing, the role of coaches is ever changing. If we’re not willing to change and be more proactive when it comes to working with students and the teachers, then we're really not being effective in our role as a coach.”

Now in her sixth year as a tech coach, Fagin’s initial feelings of isolation are long gone. Over the years, she has built a large network of edtech coaching colleagues. Here are six ways she recommends connecting with others:

Fagin earned her Google Innovator certification in June 2017. Every day since then, there has been a conversation going on among the 37 classmates.

“When anyone in our cohort has a question, somebody has an answer. Every single day,” she said. “That networking, it makes it real and makes it feel like you're not in this by yourself. You don’t have to struggle. Educating children, working with other adults, it shouldn't be a struggle. This is our calling. We should find joy in what we're doing. And I find that joy because I have my people.”

Fagin is a leader of the ISTE Edtech Coaches Network, which has more than 5,000 members and offers a wealth of resources. It also hosts monthly Twitter chats and puts on webinars. “We’re active on Twitter,” she said. “And not just during the time of our monthly Twitter chat. We're really just here to help people.”

The ISTE Conference & Expo offers many opportunities for coaches to connect and share experiences. But if that’s not possible, Fagin urges coaches to attend regional conferences. “Going to your state conference is a good way to network because it's not as expensive,” she said. She also suggests taking advantage of Edcamp, which offers free, participant-driven professional development.

4. Connect with others on social media.

Edtech coaches are active on Twitter and have a presence on Voxer as well.

“Reach out on Twitter, and ask someone to do a Google Hangout with you,” she said. “People on opposite coasts can network with each other. I like that face-to-face interaction (of video calls). If I can see your face and body language that helps me make more of a connection.”

Fagin writes a blog titled “Diary of a Not-So-Mad Instructional Tech Coach” at msfagin.com. “It’s a good way to network because I've noticed that although we're talking about tools and stuff, a lot of times there’s personal information that helps make a connection,” she said “Our jobs are our lives, but it’s not everything that we do.”

Other edtech coaches in nearby districts can be a valuable resource. “I've known some people who have just reached out informally and said, ‘Hey, we're meeting at Starbucks on a Saturday morning. We'll have coffee and let's talk about challenges that we face.’”

Jerry Fingal is a freelance writer in Eugene specializing in education, technology and business.

This is an updated version of an article that originally published Feb. 20, 2020.

When Leslie Fagin transitioned from being a high school English teacher to being a district instructional technology coach, she suddenly found herself without her people.

“I knew how to use technology effectively, but I felt like I was all alone,” said Fagin, an instructional…

Most districts have some version of a TOSA, teacher on special assignment. Often, these are edtech coaches brought on board with the idea that in 3-5 years everyone will be up to speed and the position will no longer be needed.