ISTE19 in Philadelphia: What to see, eat and do 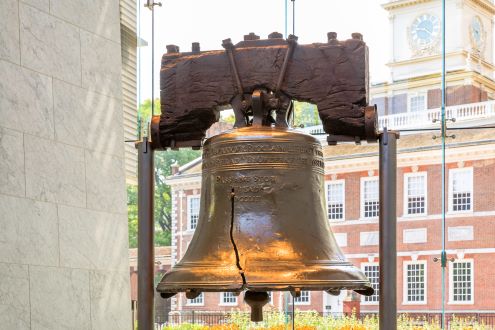 With more than 1,400 sessions scheduled over five days, ISTE19 offers educators opportunities galore to get fired up, learn new things and share ideas.

For those wishing to keep the conversations, networking and excitement alive between sessions, Philadelphia offers plenty of options within easy reach of the Pennsylvania Convention Center.

Love “LOVE”? You’ll find it — the iconic Robert Indiana sculpture — here in the City of Brotherly Love, too.

Less than a mile from the convention center is Independence National Historical Park. The park is home to such iconic early American landmarks as the Liberty Bell, Congress Hall, the first President’s House site and Independence Hall, a UNESCO World Heritage Site that changed the founding fathers gathered to debate and adopt the Declaration of Independence and U.S. Constitution.

Admission to most park sites is free. Timed entry tickets are required to enter Independence Hall this time of year, but the tickets are free if obtained at the Independence Visitor Center on the morning of your visit. The Benjamin Franklin Museum charges an interpretive fee and the National Constitution Center, a partner of the park, charges an admission fee.

Also nearby are the Museum of the American Revolution, which houses a rich collection of Revolutionary-era artifacts, personal items, letters, diaries and artwork; the National Museum of American Jewish History, which tells the story of the Jewish people in America from 1654 to today; and the African American Museum in Philadelphia, which explores the history and stories of African-Americans.

While you’re in the area, stroll down the country’s oldest continuously inhabited street, Elfreth’s Alley. Named after silversmith Jeremiah Elfreth in 1706, the onetime cart path is lined with smart brick Federal and Georgian row houses.

If art and science museums fire you up, a 1.5-mile walk from the convention center will take you past seven museums — and to the top of the steps that Rocky made famous. Immediately south of the convention center is the free, internationally acclaimed Fabric Workshop and Museum, while just west of the conference venue is the Pennsylvania Academy of the Fine Arts, the nation’s first art museum. A few blocks west along Arch Street, visit LOVE Park to view the iconic “LOVE” sculpture before setting off along the museum-lined Benjamin Franklin Parkway.

First up are the Academy of Natural Sciences of Drexel University and the kid-friendly Franklin Institute, which currently houses an exhibition on Marvel superheroes. Next come the Barnes Foundation, which boasts world-class collections of 19th- and 20th-century French painting, including masterpieces by Renoir, Cezanne and Matisse, and the Rodin Museum. About another half-mile northwest along the tree-lined parkway is the Philadelphia Museum of Art with its movie-famed steps and — before you start the climb — bronze of Rocky. The steps also provide one of the best views of Philadelphia’s skyline.

See for yourself, or get organized

With more than 4,000 colorful works of art on structures throughout the city, Philadelphia also boasts the nation’s largest public art program and lays claim to the title “City of Murals.” To sample Philly’s vast outdoor gallery for free, take a self-guided tour using your smartphone and Mural Arts Philadelphia’s Mural Finder Mobile.

For those who like to feel their skin crawl, there’s the Haunted Philadelphia: Spirits of '76 Ghost Tour and the Dark Philly Adult Night Tour. Also on the darker side of Philly history are the tours of Eastern State Penitentiary, once home to such notorious inmates as gangster Al Capone.

What else is on Philadelphia’s must-do list? Certainly, a visit to Philly’s revitalized Delaware River waterfront is a contender. Its offerings include the Independence Seaport Museum, swan boat rentals and panoramic city views at Penn’s Landing; an outdoor roller rink and carnival midway at Blue Cross RiverRink Summerfest; and colorful hammocks, floating gardens, colorful lights, and food and craft beers at Spruce Street Harbor Park.

Catch a show. Book ahead to see “Legally Blond: The Musical” at Walnut Street Theatre, the country’s oldest theater and a National Historic Landmark. Photos and memorabilia in the lobby preserve the legacy of this theater once owned by the brother of President Lincoln’s assassin. Or, buy tickets for Andrew Lloyd Webber’s “Cats” at the 92-year-old Forrest Theatre.

Catch some live jazz. Renowned for its deep jazz roots, Philadephia offers several clubs near Penn Center. Among them are Chris’ Jazz Cafe, which Downbeat Magazine named one of the “100 Great Venues Around the World to Hear Jazz,” and Time, a bar with three distinct venues featuring live jazz and soul nightly. Both are on visitphilly.com’s list of the top 20 places to listen to jazz.

Catch a foul ball at Citizens Bank Park, where the Philadelphia Phillies will host first the Miami Marlins and then the New York Mets during ISTE19.

On your way to the ballpark, stop for a bite at Pat’s King of Steaks or Geno’s Steaks in Philly’s cheesesteak triangle. According to “The Great Philly Cheesesteak Book” author Carolyn Wyman, there are better cheesesteaks to be had in town, but the city’s signature sandwich traces its origin to these two rivals who offer a true taste of Philly history. Cheesesteak connoisseurs, however, can read Wyman’s recommendations on Thrillist.

That’s just a taste of what awaits outside the convention center doors. To explore Philly further, view or download the Philadelphia Official Visitors Guide.

Chris Frisella is a freelance writer who explores educational technology and its power to reshape learning and lives.