Students can do citizen science on their smartphones 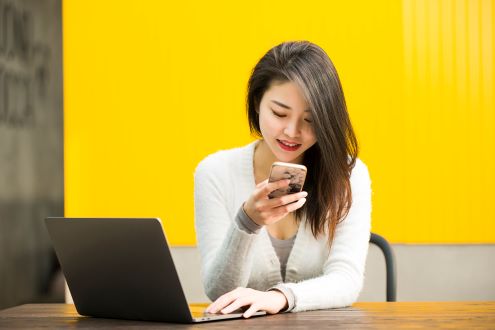 For astronomer Sten Odenwald, the smartphones we all use in our daily lives have some extraordinary scientific potential. For instance, the sensor a phone uses to help orient its screen can also measure gravity.

As the director of citizen science for NASA Space Science Education Consortium, those kinds of smartphone capabilities and the fact that most everyone has one open up intriguing possibilities for students.

“Every time I work on a particular (smartphone) sensor I start thinking in terms of well, if you can measure things like pressure or temperature or acceleration or gravity, what's a fun informal project you can imagine doing with that kind of thing,” Odenwald said.

One of the answers to his own question was to use cellphones to measure the difference in Earth’s gravity at different latitudes. That was the beginning of his Earth Rotation Detector project. With the help of the Anecdata citizen science platform, Odenwald’s project aims to determine if cellphone readings can do the same job as expensive, sophisticated scientific instruments.

Exploring the potential of cellphones

The point of the project isn’t to solve a scientific mystery — scientists have long known how gravity differs from place to place. It’s more about exploring the scientific potential of cellphones and getting people involved in the citizen science. It’s also aimed at getting students to think about projects they could do using ordinary cellphones.

That’s how this project started for Odenwald.

“I was looking at the accelerometer sensor in the smartphone wondering what I could do with that,” he said. “There are a whole bunch of laboratory activities you can do at the high school level about acceleration. But I figured OK, the simplest thing is just to put the darn thing on a horizontal tabletop and measure the acceleration of gravity.”

The difference in gravity between the equator and the poles isn’t much. But he found the accelerometers in cellphones could be sensitive enough to detect the difference.

“I thought, well, that’s interesting,” he said. “I thought let's crowdsource this and find out if we can actually measure this using a lot of people's smartphones at different latitudes.”

The project started in September 2018. In eight months about 100 people had contributed 400 data points. They’ve come from as far south as Rio de Janeiro all the way up to the Arctic Circle.

“It's looking like you can actually make the detection but you have to be very careful” assembling the data, he said. “Obviously scientists have known for hundreds of years that the Earth rotates and produces this acceleration change. But the fact that you can use something as common as a smartphone to detect it is kind of an interesting benchmark.”

Odenwald labels his projects “citizen explorer” instead of “citizen science.”

“The projects that I'm generating starting from a smartphone are not high-end citizen science projects that are on the forefront of science,” he said. “It's intended to be just exploration-type, fun projects to do something with your smartphone other than just send mail or watch the news.

“My challenge is to come up with these informal projects that bring people into contact with the citizen science spirit where they're collecting data and putting it into a collaborative setting.”

For teachers and students, the Earth Rotation Detector project isn’t something that comes with a lesson plan.

“It's not intended that this is a top-down learning experience,” he said. “It’s really intended for students to use these projects as clues to come up with their own questions that they can pursue with the same sensors or the same platform.”

The Anecdata platform, which collects and assembles the data, is free and easy to use, he said.

“It is extremely friendly to teachers who want to engage their students in a collective data-gathering operation,” he said.

In addition to the Earth Rotation Detector, Odenwald has started several other crowdsourcing “explorer” programs. Silent Earth aims to map out the Earth’s quiet places; Standing Waters Mapper seeks to create a map of fresh water sources in arid areas of the U.S.; Satellite Wrangler asks people to help catalog satellites using Google searches; and Sunlight Tracker seeks to show how noon sunlight changes at different latitudes during the year.

To participate in any of the projects, download the Anecdata app, then navigate to the individual project and follow instructions.

Taking measurements for the Earth Rotation Detector takes just a few minutes. It’s a matter of putting a cellphone on a flat surface and tapping “measure” on the app to get readings. Users are asked to take five measurements. For a deeper dive into the project, download the entire dataset and do your own analysis.

Going to ISTE19? Don't miss NASA Makerspace Playground: The Sky is Not the Limit!

Jerry Fingal is a freelance writer and editor who covers education, finance, business and agriculture.

Ever wonder if a sponge soaks up water in space the same way it would in your sink?

Why should kids spend time learning about renewable energy in school, during after-school STEM clubs or independently studying at home?

One reason is to address children's natural curiosities about how and why things happen: Why does the sun make us hot? What makes a hurricane and a…