A new twist on cyberbullying 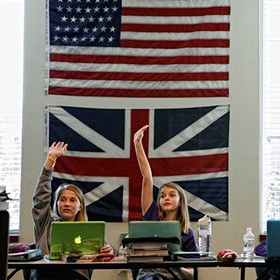 Over the years, I’ve worked hard to teach my students about appropriate online behavior. I’ve spent a lot of time teaching students to “do this” or “don’t do that” online. While I feel this method works for younger students, I’ve come to realize that high school students require a different approach. Older students don’t respond well to lecturing and finger-pointing. For something to stick, they need to draw their own conclusions. Therefore, we need to guide them, not preach to them.

That’s easier said than done. Finding new tactics for teaching digital citizenship is difficult because most educator resources don’t stray far from the traditional "Thou shalt not!" approach. That’s what prompted me to look for my own resources. In doing so, I came up with a three-pronged approach that engages my students in discussions about digital citizenship rather than patronizing them.

After seeing firsthand a few students lose college scholarships due to senseless mistakes on social media, I decided to look for videos or materials that would focus on what happens if students don’t stop and think about what they do online. I found just what I was looking for at Netsmartz Workshop, a program created by the National Center for Missing & Exploited Children, which provides age-appropriate resources for teaching students how to be safe on- and offline.

The video below, called “2 Kinds of Stupid,” perfectly illustrates the consequences of posting inappropriate content online.

The three-minute animation tells the tale of Edvardo, a good student and champion swimmer who’s primed to win a college athletic scholarship — until he takes selfies of himself drinking at a party and posts them on Facebook. He doesn’t make his pictures “private,” so everyone can see them, including his coach, teammates, parents and principal. Ultimately, the consequences are stiff. He gets kicked off the swim team and suspended from school, and he loses any chance of earning a college scholarship. My students, who are competitive by nature and want to be successful, could identify with the student who made bad choices and paid a very high price.

The next step is to tap into students’ natural empathy. Again, I like to share scenarios that my students can relate to. I start by telling the story of two best friends who unwittingly find themselves in a cyberbullying predicament. One girl buys a new swimming suit and posts a picture on social media of herself wearing it. The suit is unflattering and not a good fit, so the best friend posts under the picture, “Did you check the size?” Numerous mean-spirited comments follow. The best friend feels awful because she didn’t mean for her comment to spur such a humiliating response.

After asking students what the friend could have done differently, hands shot into the air from students eager to offer solutions. One student felt the girl who inadvertently wrote the hurtful comment should pick up the phone and call her friend to apologize. Another student suggested that someone post a nice comment, and another said someone should stand up for the girl.

That prompted a lengthy discussion. When you feel that pang of empathy, do you stick up for the student being bullied, ignore it or join in?

Using a literary reference that I knew students would appreciate, I reminded them of a well-known quote by Dumbledore in the book Harry Potter and the Sorcerer’s Stone. After the character Neville tries to stop his friends from doing something undoubtedly dangerous, Hogwarts headmaster Albus Dumbledore acknowledges Neville’s act of courage when he says, “It takes a great deal of bravery to stand up to our enemies, but just as much to stand up to our friends.”

Let’s face it: Cyberbullying is serious and it’s happening every day in our schools. But when adults constantly toss out slogans like “Be a buddy, not a bully,” or post signs designating “Bully-free zones,” the words begin to lose their impact. Just as in the 1970s, when antidrug campaigns were scoffed at by the very people they were targeting, anti-bullying campaigns are also losing their effectiveness. I got a taste of this firsthand last year when I spoke about sexting, online safety and cyberbullying at an all-school assembly. When a student blurted out an obscenity during the sexting portion, the students went wild and didn’t listen to a thing I said. I was frustrated and discouraged. Later, I offered an iPad mini to the student who produced the best video and poster. Even that got little response.

The fact is, anti-bullying clichés have become a shut-off switch. What we really need to be doing is giving students actual skills to prevent bullying. To get that conversation going, I pose this question to students: “Will you accept the identity that others give you?”

Few students have thought of the problem this way before. Allowing them to discuss their vision for life and empowering them to reject the vision others try to give them is key. It’s important to talk about someone they can relate to who had a vision and was successful. For this, I talk about Steve Jobs and how he never let anyone interfere with his vision for technology. Lady Gaga has also spoken pointedly about being bullied in school by kids who called her “ugly” and laughed at the way she dressed and sang. But she followed her vision to stardom.

Give students a voice

Allowing students to be involved in the conversation is the most important part of digital citizenship education. You can do this by posing questions in a class discussion or, to encourage more frank conversation, you can use online interactive polling software, such as Socrative or Poll Everywhere.

I did this by asking students at an assembly to get on their phones or laptops to answer some questions, while stressing that their answers would absolutely be anonymous. Then I asked questions like:

More than 90 percent of the students participating in the assembly answered the poll questions. As I showed the results, students shouted questions like, “What do you mean by inappropriate?” “How can you tell someone anonymously if you know someone is being bullied?”

Students were engaged and eager to talk, and the discussion was frank and educational — for both students and staff. No shame, no finger-pointing, no condescending admonishments. After all, these students are about to go out into the world, it’s important that we not just educate them academically but prepare them for their lives.

This is an updated version of an article that was published on Oct. 23, 2014.