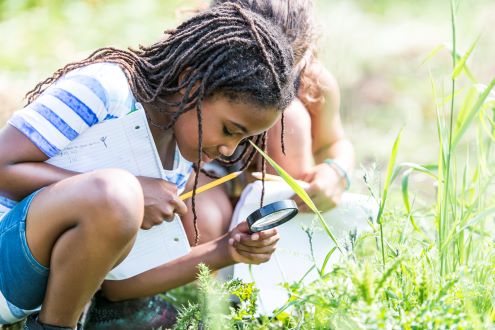 They’re the bane of summer campouts, cookouts and evening strolls. They’re also the world’s most dangerous animal, causing more deaths even than humans. Yet most people don’t think about mosquitoes until they’re actually biting.

As citizen scientists, however, students aren’t just encouraged to think about the problem — they’re empowered to do something about it.

Mosquito Habitat Mapper, a NASA-sponsored citizen science project, invites teachers and students to scout their communities for places mosquitoes are likely to breed. By reporting potential habitats through NASA’s GLOBE Observer app, they can contribute valuable data that, along with satellite observations, helps scientists forecast the risk of mosquito-borne diseases.

“We encourage people to do this year-round,” says Dorian Janney, campaign coordinator for the GLOBE Mission Mosquito citizen science community. “Don’t wait until they’re active. Go out and take pictures of mosquito habitats now. If you see standing water, those are potential breeding habitats.”

As climate change and globalization increase the spread of invasive species, including disease-bearing mosquitoes, cases of Zika, West Nile, dengue and other mosquito-related infections are proliferating. In the United States alone, illnesses from mosquito, tick and flea bites tripled between 2004 and 2016, prompting the Centers for Disease Control and Prevention to issue a call for better preparation against this public health threat.

Mosquito Habitat Mapper puts students and other citizen scientists on the front line in the effort to provide early warnings of potential outbreaks, while also helping to curb local mosquito populations.

“Finding breeding locations now gives them time to treat and eliminate the spots before they start to get an infestation,” says GLOBE Observer coordinator Holli Riebeek Kohl.
Preventing a local outbreak could be as simple as picking up trash or dumping out any sources of standing water they find, she adds.

“Just leaving a McDonald’s cup out in the rain can create a potential breeding habitat. So can a birdbath or the dog’s water bowl,” Janney says. “It’s a wonderful opportunity to have students work on teaching their community how they can be stewards for their environment.”

How to get started

Developed with classrooms in mind, Mosquito Habitat Mapper makes it easy to join the campaign against mosquito-borne illness. Just locate a nearby source of standing water, snap a picture, and upload it via the app.

But the science doesn’t have to stop there. Teachers can pursue all sorts of options for incorporating the project into their classrooms, such as:

Connecting with scientists. By signing up for GLOBE Mission Mosquito, an organized citizen science community, teachers gain access to a team of scientists and education specialists who can provide support and suggestions for enriching their science investigations. For example, the team can guide educators in developing projects suitable for local science fairs or competitions. Members of the community also gain access to informative webinars and a discussion page for connecting with other classrooms.

Taking larvae samples. Students in year-round school or summer programs can dive deeper by collecting water samples and examining mosquito larvae under a microscope or an inexpensive magnifier attachment for mobile devices. They can use their findings to learn about the life cycle of mosquitoes, analyze the density of the mosquito population or use the in-app key to identify whether the samples they find are common disease carriers.

Becoming meteorologists. While NASA scientists use satellite observations, such as temperature, humidity and precipitation data, to predict the emergence of mosquitoes, students can take their own measurements on the ground. One school used a thermometer and rain gauge to predict when they could expect to start seeing mosquitoes for the year.

Bringing in other technologies. While a mobile device is all students need to get started, they can also incorporate other types of technology into the project. Classrooms with access to drones, for example, can fly over the area and use the images to narrow down specific locations for closer examination.

Starting Mosquito Mondays. Students can make mosquito habitat mapping part of their ongoing stewardship of their school environment. “Pick two kids every Monday to walk around the schoolyard and look for potential breeding habitats,” Janney suggests.

Not only does Mosquito Habitat Mapper offer an easy, hands-on entry point into citizen science, but it also helps students develop lifelong habits for protecting against the public health threat of mosquito-borne diseases.

“The more mosquitoes that can interact with people, the higher the chances you’ll get a disease outbreak. I feel that any habitat elimination is going to help,” Riebeek Kohl says. “Using Mosquito Habitat Mapper helps them recognize where those locations are so when they see a discarded cup or something gathering a bit of water in the street, they know they need to take care of it. That has real value.”

May/07/2020
COVID-19, NASA, STEM, coronavirus, Online learning
Touring the heavens with NASA through the lens of a smartphone

Sten Odenwald likes to get the public involved in citizen science projects by using one of the most common objects – a smartphone. That's because Odenwald, the director of citizen…

Do you want your students to learn about NASA’s plans to return to the moon or its efforts to find extraterrestrial life? Or how scientists plan to grow food on extended space missions or the latest exploration of the edge of the solar system?

NASA has an army of…