All in! 4 leaders share how a districtwide vision led to transformation 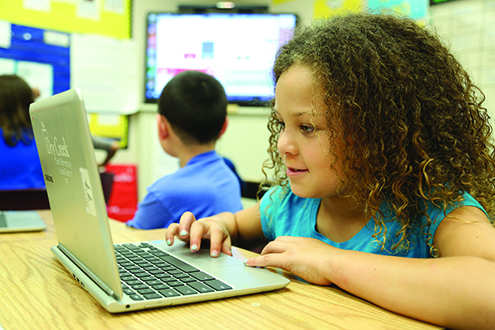 Too often, tech integration is driven by innovative teachers working alone in classrooms, tech directors and coordinators with too many teachers to adequately serve, or a single school that becomes the showcase of an entire district. But when district leadership gets behind an initiative – and takes a holistic approach – successful outcomes are far more likely.

District leadership is at the core of the four districts profiled in this article. The approaches are all unique and tailored to each district’s individual circumstances and overall goals. Each is an example of how real educational transformation can be acceler­ated with a districtwide approach.

When Middletown High School hosted an open house last winter, more than 2,000 people showed up, including many senior citizens with no ties to the school who were just curious. Families and community members alike came out on a cold night in January to learn about the urban district’s Middie Modernization Movement.

The aim of the movement is to transform the low-performing urban district, located 30 miles from Cincinnati. What the com­munity learned was not just figures on a school report card, but how STEAM expe­riences, robotics and a literary corner with celebrity readers can revive a school and the surrounding community.

“We’ve not just enlisted the school, but transformed the whole community,” says Fran Morrison, Middletown’s senior director of curriculum and innovation. “In a district where there is poverty, it’s always a challenge to address the reality of students. Our teachers take a positive attitude, and the way we’ve branded our district has made a significant impact.

For us, the Middie Mod­ernization Movement is a way to brand what we do, not just on social media, but also how teachers can embrace that mindset in their classrooms.”

Middletown is in the final year of $96 million new middle school build­ing project and renovation of the high school and, yes, they’re a 1:1 district. But the tech isn’t the main ingredient in the Middie Modernization Movement, says superintendent Marlon Styles, named one of America’s Top 30 Technologists, Transformers and Trailblazers by the Center for Digital Education.

“The Middie Modernization Movement fuels our efforts to transform the way we educate,” says Styles. “The goal is to modern­ize our approach and find innovative ways to shift practice and leverage tech.”

Before the tech even arrived, Middletown partnered with ISTE for executive-level coaching to develop a strategic plan in four parts: closing the achievement gap by integrating tech in appropriate ways, focus­ing on student wellness because healthy students attend school more often, valuing diversity by redefining hiring practices and telling Middletown’s story to the community starting with social media using the hashtag #middierising. An inaugural group of four teachers were enrolled in ISTE Certification for Educators.

Eventually, 26 educators became ISTE certified and then worked with building and district leaders to become digital leaders. The district ran a five-day digital bootcamp for administrators, along with two additional days to focus on tech integration.

The framework includes teacher leaders who are cross-trained in STEAM and maker movements, the district’s learning manage­ment system or Google Classroom, and who act as instructional coaches in the buildings. These leaders provide “Lunch and Learn” professional development sessions for their buildings and host monthly Twitter chats for all teachers that dig into what’s happening at the classroom level.

Middletown is eight months into the strategic plan, and there are no hard numbers yet. In high-poverty districts like Middle­town, students can be two to three years behind their peers. The district is reaching for a 1.5 growth metric per year to close that gap. So far, the benchmark reading and math data look good. Perhaps more importantly, the culture and the climate have shifted.
“We anticipated that we would need to take into consideration the readiness level of our staff to interact with technology, so we invested in adults heavily,” says Morrison. Buy-in from staff has increased because the district is offering staff access to opportuni­ties to invest in themselves.

“We challenge teachers to be design­ers of instruction, but also use the science behind instruction to personalize that instruction, not for a mysterious group of students, but the ones in their classrooms.”

In 2012, the rural Northern California district in the foothills of the Sierra Nevada Mountains spent $2.2 million to update and rewire classrooms. In 2013, Dry Creek added 1:1 Chromebooks, and continued to add devices over the next several years.

A couple of years ago, Dry Creek reinvented the position of technology direc­tor. The district hired Bryan Wilke because he had 15 years of teaching experience and an edtech background. With Wilke in place, the focus shifted from devices to how Dry Creek students are thinking in the class­room. The goal: Teaching the skills needed in the future workforce.

“The reality is that many districts rushed out and bought devices without much train­ing or forethought about how to support student learning,” says Wilke, a participant in the ISTE Digital Leadership Summit. “I’m always looking for the next iteration to make that work better. We have to account for the fact that our staff needs more train­ing on every device and that our users are at different levels.”

Dry Creek developed a Tech Integration Committee that meets regularly to develop an overall plan to address the different lev­els of tech competency throughout the district. The committee started by looking at different standards, including the ISTE Standards, then backward-mapping existing projects. The result is classrooms driven by project-based learning that’s more in-depth and interactive.

For example, the California state standards have fourth grade students learn about the state and the region. Coyote Ridge fourth grade teacher Jamie Albracht-Halsey, also on the Tech Integration Committee, had been teaching the same lesson for years, but says it was dry with little interaction or creativity.

She looked at the ISTE Standards and tweaked the project to incorporate the Knowledge Creator, Digital Citizen and Creative Communicator standards. She had students use Google Maps to plan a trip across the state, documenting the places they go on an interactive map by adding pictures and text. Kids shared their projects using Flipgrid and reflected by writing blog posts as they went on their journey.

“Incorporating the ISTE Standards and backward-mapping the project made the subject come alive for students,” says Albracht-Halsey. “Some teachers are excited, and some are more reluctant, but teachers realize we’re not going backward with tech. It’s here to stay and doesn’t have to be scary. They don’t have to know everything before they put these tools into kids hands.”

The Tech Integration Committee spawned professional development after school, led by teachers like Albracht-Halsey who have implemented successful projects. The PD is delivered in a cafe model, with multiple types of classes requested by teach­ers. Teachers are reimbursed for this profes­sional development, demonstrating that the district considers it essential and values their educators’ time.

“Some people think it’s just one more thing, but one of my charges is to shift that mindset. Kids are already doing it,” says Wilke. “If it’s meaningful, it makes the information live beyond something out of a book.”

One of technology’s great promises is that it can level the playing field for all students through personalized learning. Of course, that’s not true if all students in a district don’t have access to the same technological opportunities.

Equity is an issue for Alabama’s Baldwin County Schools. Located in the southwest corner of Alabama, Baldwin runs along the Gulf of Mexico and spreads across 66 miles as the largest county east of the Mississippi, encompassing some of the wealthiest and most impoverished areas of the state.

Baldwin demonstrated its belief in the power of technology by putting a computer in the hands of every K-6 student and giv­ing every student in grades 7-12 a laptop to take home.

The ambitious program didn’t come without problems. Laptops got broken and were expensive to fix, leaving kids without computers. The district asked families to pay a technology fee at the beginning of the classroom teachers who have been through eMINTS training.

“At first, the idea was getting the kids to work in groups and other 21st century skills,” says King. “Now, they’re just skills because we’re here in the 21st century. Did the technology make the test scores im­prove? We don’t have it isolated so we can’t say, but what we can say is that our teachers have gotten more comfortable doing things with students, and that kids like being in school better.”

Prince William County Schools in the Washington metropolitan area is the second largest district in Virginia. As a decentral­ized district, independence is encouraged, and school leaders are allowed to forge their own path to success. The challenge in such a system is equity.

Take two schools who share the same campus. The first was a 1:1 elementary school where the teachers were innovative and students were empowered to create. The second was a middle school where kids were mostly doing packets. The principals
were not collaborating in any intentional way.

That is until the district decided to see how these schools could partner and learn from each other. Each school created teams and did classroom visits with the principal in every classroom. The two staffs learn from each other, and the students benefit. As they transition from elementary to middle, stu­dents are finding a more cohesive experience.

This is an example of how schools can work together, even across a decentralized district, says Diane Harazin, supervisor of instructional technology. Through newslet­ters to administrators, Harazin highlights the successes of schools who have put effort into technology and professional development, and offers support to help other schools get there.

Prince William schools are all focused on future-ready skills, thanks to a statewide Profile of a Graduate program. All schools emphasize the four C’s, and there’s a tech coach at every school to support content area teachers with embedded technology.

“We are decentralized, but when it comes to instructional technology we have a structure in place to create a unified vi­sion with these instructional technology coaches,” says Harazin. “The power behind our site-based management system is that those people who are true leaders, lead. They pave the way and have this opportunity to do what they think is right,” she says. “We have a vision in our district, but it’s looked at differently in every school.”

Jennifer Snelling is a freelancer who writes for a variety of publications and institutions, including the university of Oregon. As a mother to middle and high school-aged  children, she’s a frequent classroom volunteer and is active in Oregon schools.

Before COVID-19 put schools in lockdown, teachers at Gwinnett County School District in Georgia were reimagining their class field trips.

As students return to the classroom, addressing instructional time lost to COVID-19 may be one of educators’ greatest challenges this new school year. Although students have made a range of…

After more than a year of struggle and stress, many educators are hungry for a return to normal. But what are they really going back to?

Copious research shows that in education, what’s familiar and comfortable isn’t always the same as what’s equitable and effective.