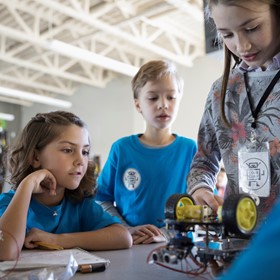 Maker faires, science camps, robotics competitions — they’re often the go-to strategies for recruiting students to STEM careers. Kids who are passionate about STEM find them irresistible. But are they effective at winning over students who are on the fence about it?

The 2016 Speak Up survey suggests they might not be.

Despite investing several billion dollars in STEM education over the past decade, the United States has seemingly failed to move the needle on student interest. About a third of students who responded to the survey said they’re very interested in a STEM career, while nearly half said they’re somewhat interested — roughly the same as when the survey began in 2003, says Project Tomorrow CEO Julie Evans.

“I would think that with all this interest in STEM from employers, policymakers, school districts and the community, we would see an increase in student interest. But we have not seen that number change at all,” she says.

“My interpretation is that all of these wonderful programs that exist out there for getting kids interested in STEM are really just appealing to kids who are already interested. They’re really about retention, not recruitment or attraction.”

Robotics competitions, for example, lure students who are highly engaged in STEM and feel confident in their technology prowess. But they may be intimidating to those with middling interest who are less secure in their knowledge and skills.

“The idea of being pitted against another kid is not warming their heart to the benefits of the STEM field,” Evans says.

To get more kids interested in STEM careers, it might be time to try a different approach.

STEM recruitment efforts often center on summer camps or after-school programs. But Evans sees them as a one-size-fits-all approach that, in the age of personalized learning, is on the decline.

When asked how they would like to learn about STEM careers, students expressed a preference instead for digital solutions like watching a video, taking a self-assessment quiz or researching on websites — anything that puts them in the driver’s seat.

“We’re seeing middle school students exploring different types of careers using digital tools, as opposed to their older peers who are interested in technology but are still holding on to more traditional means of exploration like after-school programs or mentoring with someone in the profession,” she says.

“They’re very adept at using technology tools to direct their own learning, and they want to do the same thing with their career explorations.”

Girls, in particular, are drawn to a more personalized approach, she adds.

“We need another Sputnik moment.” It’s a common refrain among policymakers, who bemoan the lack of a stirring scientific event to drum up widespread interest in STEM. But Evans disagrees.

Today’s students, who see technology as a backdrop to their lives rather than the star attraction, aren’t as captivated by STEM products or events as their predecessors. For them, it’s all about relationships.

For example, when researchers took small groups of southern California high school students to meet local engineers a few years ago, the professionals showed up eager to talk about the projects they were working on. But the teens weren’t interested. Instead, they bombarded the engineers with personal questions.

What was your favorite subject in high school? Did you ever feel like you weren’t successful in science class, and how did that make you feel? Were you a techie kid in high school, or a regular kid?

“They were very interested in the personal profile of these career professionals,” Evans says. “They want to know what the person is like and what the job is like.”

Of the engineers they talked to, students were most drawn to the one who opened up about his own struggles in school, admitting he wasn’t a great student and had to spend several years at a community college before pursuing his engineering degree at a university.

“Students who feel insecure about their science or math skills are looking for ways to see themselves in these roles,” Evans says.

“Students who are somewhat interested in STEM have different aspirations in terms of how they want to learn about it,” she says. “We’ve got 47 percent, but we’re not coming up with programs to recruit them. Instead we’re relying upon tried-and-true programs focused on retention.”