Teaching Kids What AI Is (and Isn’t) 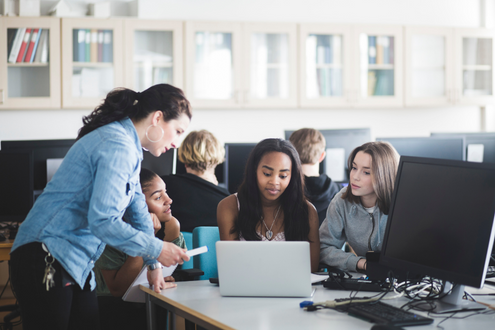 Designed to blend seamlessly with other technologies, AI operates invisibly in the background of their lives. Because it doesn’t look like they expected — robots that think and feel like humans — they often don’t recognize it for what it is.

To prepare students for an AI-powered future, educators need to pull back the curtain on AI and help kids understand where and how it influences their lives. But AI can be a tricky concept to pin down. What is it, really? What makes it different from all the other technologies they take for granted? If AI doesn’t look like they expected, what does it look like?

Getting a handle on AI

For decades, science fiction has been serving up fantasies about what AI will look like, from WALL-E to C3PO. But if these characters represent the ultimate goal of AI, we’re still a long way off.

“No one has solved the challenge of creating a machine that replicates human intelligence in a way that it can interact, reason, process, respond and be creative with emotion like a human,” says Michelle Zimmerman, author of Teaching AI: Exploring New Frontiers for Learning. “Technology hasn’t come close to building a machine that is capable of combining these things.”

But computers can be programmed to mimic certain aspects of human intelligence, such as:

“The basic definition of AI is simply when a computer is able to perform tasks that normally a human would perform,” says tech integration specialist Deb Norton, who teaches ISTE U’s course on artificial intelligence. “The computer is basically teaching itself or programming itself to do tasks.”

Machine learning, for example, is a specific type of AI that is capable of recognizing patterns in data and making predictions based on those patterns. The more data it is fed, the more accurate it becomes. When machine learning is combined with another AI capability, such as speech recognition, we end up with digital assistants like Alexa and Siri that get better and better at responding to our requests.

Because AI is still in its infancy, its definition and capabilities continue to evolve. With the recent introduction of OpenAI's ChatGPT chatbot, for example, AI can now generate text, write essays and even co-author research papers.To learn how to spot where and how AI is working in their lives, students need to be able to think critically about artificial intelligence — to become AI detectives.

Class discussions about what AI is (and isn’t) can help lay the groundwork for this inquiry at any age.

“What I’m trying to do is not only give kids experience with AI, but to also educate them about the progression of AI and how its going to become more and more prevalent in their lives,” says April DeGennaro, a gifted education specialist at Peeples Elementary School in Fayetteville, Georgia. “If you just have a definition of what AI is and you lose what the component parts are, for kids that gets very cloudy. Kids learn it more by example: This is AI, this is not.”

DeGennaro starts by helping students explore the AI tools they’re already using or hearing about. Each week, for example, the whole class watches her type a letter into the Google search bar on her Chromebook, and they try to predict what auto suggestions she’ll get back. As time goes on, they see the results change based on what DeGennaro has been searching — an example of machine learning at work.

They also discuss Snapchat filters and how the app’s facial recognition uses digital nodes to map out facial features and manipulate them to create funny faces.

“The enduring understanding is that this isn’t magic,” she says. “There’s nobody in there. It’s an algorithm. When you type in a Google search, the assistant on the shelf is trying to figure out what you’re going to say based on the billions of searches in its database.”

In fourth grade, students start experimenting with Cozmo robots, which can learn to recognize faces and objects as well as get to know their environment as they move through it. The kids compare Cozmo to the Bee-Bots they used in first grade.

“Bee-Bots will run off the table, but Cozmo won’t because he senses his surroundings. Bee-Bot keeps going because it’s not intelligent at all. How are they different?”

Cozmo is also different because he has a personality. He sometimes wakes up grumpy and occasionally throws a tantrum. But how much of that personality is AI, and how much is programming?

“I don’t even know the answer. That’s where AI gets tricky,” DeGennaro says.

She encourages students to start thinking critically about the various machines and devices they use in their daily lives. Together, they discuss different technologies and try to determine whether each example counts as artificial intelligence.

“Roomba is an AI vacuum, but how is it different than any robot that bumps against the wall and turns around? It learns the room,” she says. “How about the automatic door at grocery store, is that AI? It opens without me telling it to. But that’s just a sensor; it’s not making any decision. Students can problem solve that back out as they think about what is AI.”

When discussing AI, the important thing for teachers is to realize they don’t need to have all the answers. The point is to get students asking questions.

“You do not need to be expert or know AI at a very deep level to be able to make connections with students and help them to gain a general knowledge of what it is,” Norton says.

Nicole Krueger is a freelance writer and journalist with a passion for finding out what makes learners tick. This is an updated version of a post that was originally published on May 2, 2019.

Is AI Ready To Meet the Needs of Learning Recovery?

Millions of school children walked into their classrooms at the start of the academic year lacking one crucial element that should have set them up for success: the prior knowledge they need in order to take on a new grade level.

Because of COVID-related learning interruptions,…