Explore These Virtual Worlds for Learning 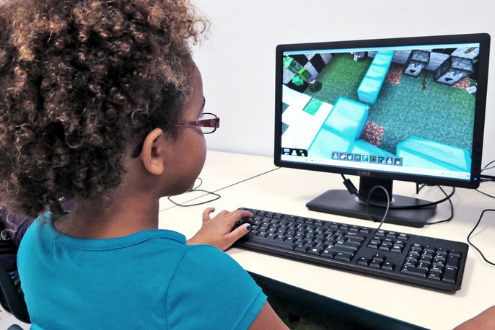 The pandemic ushered a new era in remote and hybrid learning technologies that gave us renewed perspective on edtech best practices. Across the education spectrum, educators and learners used tools like Zoom, Webex, Google Meet, Microsoft Teams and others to communicate, plan and collaborate.

While harnessing these powerful and useful technologies, however, we discovered some of the glaring weaknesses of these platforms: Namely, people grew weary of virtual meetings. Staring at a screen for long periods of time watching mostly a lecture style presentation became tiring and led to pervasive student (and teacher) disengagement.

What was absent from these remote learning technologies was a way to immerse students in content within different landscapes. Even though there are many virtual world options available to effectively engage students in this way, many of them were left on the shelf.

Now that teachers have learned an amazing number of new tech skills and strategies to engage their students, perhaps it's the perfect time to revisit virtual environments for education.

The case for virtual environments in education

So what is a virtual environment, really? Is it a game? Well, sometimes. But not always.

Games are fun, and most have rules. Virtual environments (VEs) can contain games for diversion or amusement, but most VEs weren’t designed to be games. They don’t have rules, and therefore are not games. They are whole worlds.

Perhaps more succinctly: Games have points, scores and levels. Virtual environments don’t need any of those. They are primarily tools for creation and communication.

Learning management systems, such as Moodle, Google Classroom, Schoology, etc., are sometimes labeled as virtual environments, but for our purposes and definitions, they are not!

The amazing benefits of virtual environments

Let’s focus on several of the qualities that make virtual environments such a rich backdrop for learning:

Students can visit virtual environments to view, analyze, evaluate and create content, which are higher-order actions in Bloom’s Taxonomy. Additionally, VEs allow students to ascend to the top rung of the SAMR model, which is a redefinition of student performance. Finally, the widely adopted four C’s (creativity, communication, collaboration and critical thinking) are easily nurtured and assessed within virtual environments.

They allow building and creation.

One of the best things about virtual environments is that they allow users to build and create. This feature is often called “content creation.” Among the possibilities are virtual simulations, such as a virtual hospital for training health care workers or a virtual battlefield for military missions. Users can also create or reimagine works of art and virtually reproduce historic architecture, such as medieval castles, the Roman Colosseum or colonial villages.

Almost all virtual environments also have customizable avatars that allow users to extend their self-expression into the digital realm, by choosing clothing, tools, hair styles, etc.

Most virtual environments also allow for amazing collaborative opportunities where groups of people can build together. Because socializing is key to the experience, they often include chat programs for communication, and some even have voice tools for heightened collaboration.

So what are the best worlds out there? Read on for our two favorite worlds and suggestions for several other ways to engage kids in virtual environments.

This popular online world re-ignited enthusiasm in using virtual environments for learning, especially with a younger generation that will most likely demand a higher graphical building model and interaction as they move on or level up. And now that Microsoft, after purchasing the platform in 2011, is bringing its formidable marketing team to the table, Minecraft’s immense success and improvement is secure.

Minecraft has grabbed teachers’ and parents’ attention vicariously as they witness their children engaging, collaborating and problem solving. Think of it: This generation of Minecrafters is the first that will grow up with a native understanding of what it means to “be” an avatar. That, friends, is a game changer. Minecraft can be hosted on a school's server, and Minecraft: Education Edition, released in 2016 and updated regularly based on educator feature input, is a great way to get an education-based setup with support.

Since mobile technologies are in high demand, Minecraft: EE has an app that isn’t a fully functioning computer-based program but still has a lot of functionality and kids (and adults!) can play on phones, tablets or consoles.

If you want to see how educators use Minecraft in the classroom, watch Rachel Jones talk about how she uses it for language instruction, read how Douglas Kiang uses it to foster collaboration and team building, or check out Scott’s own Minecraft:EE classroom unit, Jargon Gardens, created to help students learn about computing terminology in a fun way.

Watch this video about how Jefferson County, Kentucky, schools are using Minecraft to engage students in distance learning when in-person school was closed during the COVID 19 pandemic.

Read more about other educational benefits of Minecraft in these additional resources:

Pioneering educators can create their own builds for students to work with on this open source virtual world platform. Again, students’ own content creation is the driving force. When teachers see the look of fascination on their students’ faces, they can’t help but feel rewarded.

OpenSim environments look and feel like Second Life (SL) because they share the same code, which was developed on an open source early version of the Second Life platform. SL is the gold standard for content and interface, but you can implement OpenSim on a much smaller budget.

Keep in mind that although you can get the OpenSim software for free, like many open source applications, it works best on a server that can handle the memory requirements. While server space is a cost, a school-based OpenSim build allows for maximum control for schools so that you can limit student interaction within your school.

Another option is sim-on-a-stick, a cheaper alternative that basically gives students their own virtual world on a memory stick or thumb drive. It’s important to collaborate with your IT department and stay on their good side so they’ll be eager to support you. Bring them cookies and casseroles early on in the school year!

Learn more from these articles about OpenSim:

What are some of the newest developments in virtual worlds? Glad you asked. Some really cool trends are on the horizon:

While not exactly a true virtual world that allows multiple users to interact, this program is a great place for educators to start giving students experiences in creation and coding, which will lead to virtual environment learning in the long run.

This program offers 3D building, communication and privacy protections, yet it's not billed as an educational entity. It’s “cool” factor and ease of use give it real potential in education. (Are you listening Mozilla!)

Microsoft is onto something tremendous with its HoloLens, built on its Kinect technology. This may be the fuel for a very real adoption surge, since it could potentially let a student lay out a Minecraft build on the living room table! Chances are it will take awhile for adoption itself, though, since it is firmly entrenched in the $3,000+ price range.

Oculus Rift generated excitement because it allows the end user to explore virtual environments through a 3D viewer interface. Think of exploring a virtual Roman Colosseum as if you are there! Amazing potential. Oculus Go built on the success and now Oculus Quest 2 is a leading provider of VR hardware and content. Some content to check out can be found in Engage, Virbela and Spatial.

Second Life is still out there pushing the envelope for users 17 and Up. While it may always have its wild side, there are some new trends that show incredible potential. Valery Hill has created and promoted Community Virtual Library into what is becoming a movement. SL is increasingly becoming a haven for artists and writers because it allows their audiences to be engaged, involved and following along, not just as viewers or readers, but as co-makers. Not only are the artists able to create amazing works of art in the virtual world, but viewers of these expressions can take pictures and essentially create their own works of art. Art begets art.

For younger learners this platform may prove to be as popular as Minecraft, but we haven’t seen traction in schools just yet. Keep an eye out for this one.

Quest Atlantis was an original VE for Education. It’s still around after having gone through some updates and changes. This is specifically designed for younger learners.

This is another virtual environment that has been around since 1995 and has developed and grown over time. Definitely still in the game and worth a look for educators with both younger and older students.

Andrew Wheelock is technology integrator for Erie1 Board of Cooperative Educational Services/Western New York Regional Information Center in New York. He was previously co-chair of the ISTE Virtual Environments Network, developer of the Islands of Enlightenment Projects in the OpenSim Virtual World Project and host of Coffee with a Geek.

Scott Merrick is a computer lab teacher at the diverse McMurray Middle School, Metropolitan Nashville Public Schools in Tennessee, where he teaches around 400 students per school year. He is the recipient of the annual ISTE VEN Virtual Pioneer of the Year award in 2021 and the ISTE Making IT Happen award in 2014. He enjoys sailing his yacht in Second Life and blogs at scottmerrickdotnet.

This is an updated version of a post that originally published on May 4, 2015.

Explore These Virtual Worlds for Learning

The pandemic ushered a new era in remote and hybrid learning technologies that gave us renewed perspective on edtech best practices. Across the education spectrum, educators and learners used tools like Zoom, Webex, Google Meet, Microsoft Teams and others to communicate, plan and collaborate…