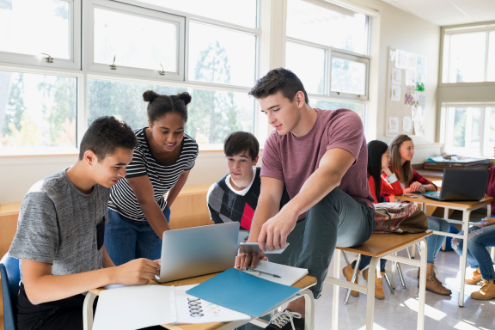 Algorithms are nothing more than specific instructions to follow. OK, that sentence might be contested, but I’d wager it’s true in a K-12 context.

Despite being the backbone of social media, search engines and e-commerce, algorithms are already in schools. Remember how there was a strict protocol for bathroom time in elementary school? Clean up desks, line up single file, turn the lights off, walk in a straight line, do your business, wash your hands, take a drink, and off you go. That’s an algorithm.

Khan Academy does a great job of explaining what an algorithm is. To paraphrase, it’s a set of steps to accomplish a task. Nearly everything done on a computer or related to automation is the result of an algorithm.

Studying algorithms empowers students to have a better understanding of the technology they use both for entertainment and for learning. So where does that leave educators? Are they expected to teach students the ins and outs of algorithms? If so, how deeply? In which subjects?

This is where computational thinking (CT) comes in. The best way to spread the work is to integrate CT into all subjects. Not all the time, but strategically.

To illustrate how that can be done, here are the steps you can take to have students design an algorithm for Spanish class.

As with any project, knowing the end goal is vital. This is why the computational question is the guiding star. It helps determine if your algorithm is “correct.”

In my Spanish poetry lesson students set out to solve the problem, “How can we categorize and identify poems?” I intended for students to be able to recognize a specific style of Spanish poetry called a décima.

You can’t guarantee that your algorithm will work perfectly on the first try. That’s why it needs to be put to the test!

In the poetry lesson, students design an algorithm by analyzing three poems that are décimas and an odd-one-out. After a class discussion verifying their findings, students get to work designing an algorithm that can identify a décima. Additionally, they are tasked with writing a décima themselves!

In the poetry lesson, after designing algorithms and writing their poems, students exchange them to check each others’ work. Their algorithm might make sense to them, but if someone else can follow it and get the intended result, then it really works. If it doesn’t, then groups leave feedback for each other. This is how I ensure students share and check their work. If their algorithms consistently produce an intended result, then they work!

You might be asking, “Isn’t an algorithm supposed to be shared with a computer? This is computational thinking after all.”

Not necessarily. But it could.

If you have to first teach students to be familiar with block-based coding before your lesson, that will take up more time than most teachers have.

While the algorithm in my lesson is fairly simple, it doesn’t necessarily need to stop there. Instead of answers being “Yes, it’s a décima” or “No, it’s not a décima”, you can expand the algorithm to properly identify non-décima poems: haikus, sonnets, etc.

They can also eventually automate this process on a computer, by teaching a computer to analyze rhymes, syllable counts, number of lines, etc., and identify a poem.

There is always more work to be done, and the teacher’s job is to plan ahead and know when to call it. This option to continue forward brings CT to a whole new level.

The further the idea is pushed, the nature of the problem will change requiring more decomposition, data analysis and algorithmic design.

Computational thinking doesn’t stop at designing an algorithm. CT is about using data to create an algorithm and communicating that algorithm to a human or a computer to solve a problem.

Computational thinking is not the shiny awesome future where the Jetsons live. It’s the present moment. Automation and algorithms aren’t coming, they’re here. Students can learn these concepts in any class, at any age, in any subject. When they do, they not only strengthen different types of thinking but also deepen their learning in that content area. Integrating CT will create better problem solvers at all levels.

Algorithms are nothing more than specific instructions to follow. OK, that sentence might be contested, but I’d wager it’s true in a K-12 context.

Despite being the backbone of social media, search engines and e-commerce, algorithms are already in schools. Remember how there was a…