How To Empower — Not Scare! — Parents About Technology 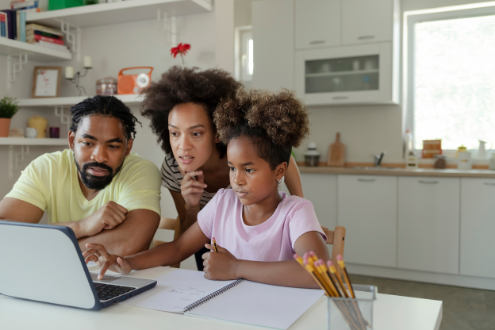 It’s a very stressful experience to have an audience member stand up, say you’re wrong and walk out in the middle of your presentation. Fortunately, that’s only happened to me once, but when I teach parents about digital citizenship, I sometimes get very negative responses.

Although many parents have let me know after a talk that they thought my presentation was amazing, others have pulled me aside to say that they can’t believe I don’t see that Snapchat destroys children. In my years of teaching hundreds of small parent groups, I’ve seen tears, anger, fear, excitement, laughter and anxiety.

I’m not surprised. I know that parents get emotional about technology. In fact, a 2018 American Family survey found that technology’s influence on their children was the number one fear of parents.

You may experience this anxiety about technology in your school from parents, teachers or other staff who see revised learning goals, updated devices, new software or other tech-related issues as a threat to the school community. That’s why it’s important that parents, educators and administrators work together to create a safe and positive environment.

Here are three ways to empower parents to support digital citizenship efforts – and not scare them.

Christopher Ferguson is a psychologist and psychology professor at Stetson University in Florida. He researches media and behavior, video games, violence and more. His advice: Cite data when talking to parents.

“Fear tends to thrive in an atmosphere of no data,” he says. “There’s this echo chamber between journalists and politicians and anti-media advocates that has been going on for a long time. And in my experience if you present parents with actual data, most of the data suggests that technology use is, at the very least, not one of the major things that are confronting kids.”

This data can support efforts to focus on the positives of technology. Share the good that tech can do in student’s lives and the larger community.

Some other respected journals that publish studies on media and behavior include:

Once parents have the data, they are better able change their views and evaluate “clickbait” headlines, Ferguson says.

2. Point out historical and generational differences

It’s easy to forget our own teen years. As parents we may regard some of the technologies our kids use as scary, but usually that’s because we aren’t knowledgeable about the new devices, just as our own parents may have been wary of the technologies we used in our youth. Many decades ago, when radios, and later TVs, hit the scene, there was much hand-wringing about their possible negative effects, too.

Ferguson advises reminding parents of how it used to be when they were young. “Ask them:  Remember when you were a teenager and the A-Team was causing violence in society? Remember when your parents told you that listening to rock music meant you would become a Satanist? Did you change your mind?”

Fear does not come from lack of awareness but from lack of understanding. In the video below, special education teacher Sean Arnold addresses this topic in his TED Masterclass talk, “What’s the Problem With Kids These Days? Maybe it’s Us."

Once when I was teaching a class of parents of teens, I brought up some of the positive aspects of technology. I was met with glares and horror stories about what social media and cell phones had wreaked in their homes, and very quickly emotions ran high.

That’s when I realized I needed to take a step back. I didn’t finish my planned presentation that day, but went off script. Data is important, but we should lead with empathy, not numbers. I shared my own experiences as a mom dealing with technology in the home.

First, I lauded them for doing the work. I shared my belief that their children were lucky to have parents so concerned, caring and involved in their lives. I echoed that, yes, technology moves fast and is confusing and sometimes scary. But tech can also be a powerful and positive force.

When talking to parents, acknowledge their fears and strong feelings. Let them share their thoughts and get those emotions out.

After my presentation that day, a few parents approached and thanked me. One mom who moments before had glared at me ended up signing up for my newsletter and said she wanted to keep in touch.

It is easy to talk about all the scary things about technology; the media is full of examples. It’s much harder to push against that narrative – and to be pushed back on it publicly. But we must do it! We must spread empathy and empowerment, not fear.

Carrie Rogers-Whitehead is the founder of Digital Respons-Ability and the author of Digital Citizenship: Teaching Strategies and Practice from the Field and the upcoming title from publisher Taylor & Francis, Becoming a Digital Parent.

This is an updated version of a post that originally published on Feb. 10, 2020.

How To Empower — Not Scare! — Parents About Technology

It’s a very stressful experience to have an audience member stand up, say you’re wrong and walk out in the middle of your presentation. Fortunately, that’s only happened to me once, but when I teach parents about digital citizenship, I sometimes get…

Feb/05/2020
#DigCitCommit, Digital Citizenship, Parents
From discord to civil discourse: The human side of digital citizenship

Gun violence, climate change, immigration, abortion. There seems to be no end to the number of divisive issues that are causing people from all walks of life to lash out in angry ways.

It’s not just that we disagree; it’s that we seem to have lost all sense of common ground. In…

Educator and author Kristen Mattson, Ed.D., has a bone to pick with a lot of the digital citizenship curricula used in schools today. Too much of it, she says, focuses on what not to do, and it rarely addresses the opportunities and responsibilities of the digital world. In addition,…