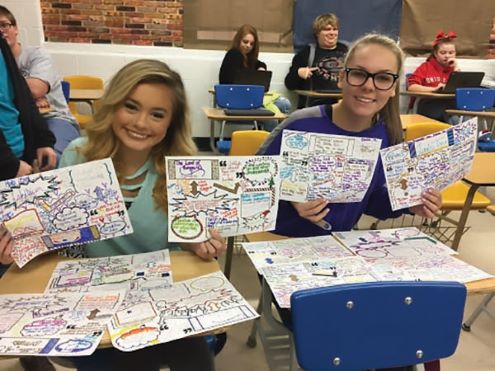 “They were very willing to share their negative comments with me,” Steinbrink said.

She endured their complaints but saw the two were making the mythology unit — one of her personal favorites – miserable for her and the rest of the class. Finally, she snapped back at the complainers: “We know. Everybody knows. It’s dumb. You hate it. We KNOW.”

That episode set in motion Steinbrink’s efforts to make The Hobbit more engaging. To develop a strategy, she drew on her knowledge of learning sciences.

The sketchnoting movement had recently caught her attention, and it resonated with her knowledge of dual coding. Both involve tying together text and images so our brains have two ways to remember and learn content.

With her class, she introduced the strategy in an analog way. She used Google Drawings to create a printout with shapes and callouts that provided a framework for students to take notes and draw images. She explained dual coding and taught them the basics of taking notes using both text and drawings.

The class then embarked on taking notes of the film version of The Hobbit. As motivation, Steinbrink offered to allow students to use their sketchnotes on an upcoming quiz. Also, the notes would not be graded. The point was to highlight important parts of the story with both text and images.

It started slowly, but Steinbrink could feel a ripple of engagement. Students asked about characters’ names and wanted the movie paused so they could ask questions. At the end of class, students offered that the exercise wasn’t terrible and maybe the story was actually, maybe, not boring.

The experiment was a turning point for the class. It created engagement and helped students retain the material, which laid the groundwork for deeper learning.

Steinbrink subsequently introduced ways for students to do sketchnoting on their Chromebooks.

She found that it was easier to begin with a word-processing program like Google Docs so students could take notes quickly and then use a graphic program to add images. Steinbrink gives students a choice of programs — Google Drawings, Google Slides, Canva, Adobe Spark Post and Buncee — and allows them to use the one they feel most comfort- able with.

Students can take notes first then go back and add images.

Once they have the concept down, she allows them to do sketchnoting the way that best suits them, whether that’s digital or on paper.

It’s rooted in brain science. Steinbrink’s interest in the subject allowed her to see how sketchnoting incorporated the theory of dual coding, which postulates that humans perceive verbal and visual information via separate channels. Processing information both ways facilitates retrieval and enhances memory.

She explains the science behind the practice to students.

“I tell them that this is not just something you do just for an assignment, but you could do this in any class in college,” she said. “Or if you’re at a job and you’re struggling to learn something you have to know, you can use it there as well.”

It’s engaging. It’s novel and once students discover that it works, most embrace it, Steinbrink said. At the high school level, students aren’t doing a lot of drawing and coloring.

“It was super fun,” she said. “I didn’t know how it would go. Every  class is different, and some love it more than others. But I make sure everyone knows it. And I tell them that this is something they can use in college.”

It can force them out of their comfort zone. Some students are reluctant because they think they lack artistic skills. Steinbrink understands that.

“Hey, I draw stick people,” she said. “It doesn’t matter. I tell students that they’re the only ones who have to know what it means. Literally, nobody else has to get it.”
She has also learned that it’s best to teach sketchnoting separate from content, so students aren’t learning two things at once.

Start with something nonthreatening that will never be on a test, she said.

“It becomes a tool in their toolbox,” she said. “They’re not going to use it for everything, just like you don’t need a wrench for every repair.”

Jerry Fingal is a writer who covers education, business and finance.

“They were very willing to share their negative comments with me,”…